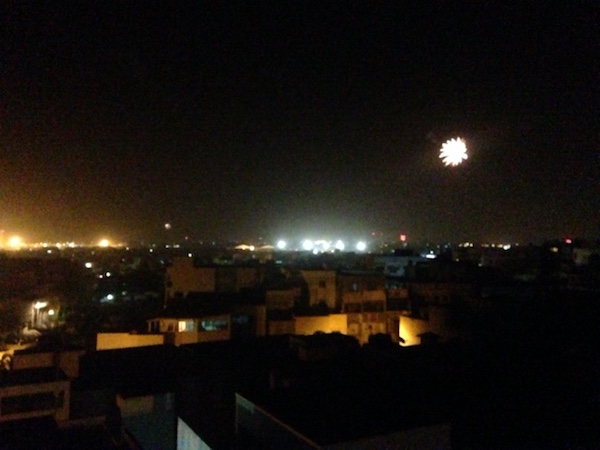 I don’t know why I keep writing about the new year since I am possibly less enthused about it than anyone else on the planet. But, I did do two fun things to ring in 2017:

On New Year’s Eve a friend hosted dinner at his house and then we went up to the roof to count down to midnight. The annual official fireworks display was cancelled this year due to security concerns but the Dakarois took it upon themselves to pick up the slack. For at least a half hour, fireworks popped off every few seconds, every which way you turned. My photographic evidence, unfortunately, is not much proof at all… I managed to capture exactly one remotely-in-focus firework on my iphone.

I asked the people I was with to forgive my Eeyore-ness but to please help me come up with something, anything, to make me hopeful about 2017. Here’s the best we could do: a highly effective ebola vaccine has just been cleared for use in case of another outbreak, and the recent Chinese ivory ban means fewer elephants will die. (I would welcome your additions to this rather sad “list.”)

The next day, I went with Mamie, Tantie, their cousin, and a couple of friends to see Youssou N’Dour’s annual New Year’s concert. Mamie insisted that we get there before 10pm because she was sure the show would start early, it being a work night. I have been in Senegal less than a year, yet found myself setting straight someone who’s lived here her whole life. I told her, “If this show starts before 1am, 2017 really is bringing the end times with it.” And like clockwork, Youssou came onstage at 1:03 am. At 4:03 am, he was still running up and down the catwalks like a man half his age, and I had decided that third time’s the charm and I am done seeing him in Senegal. It’s a constant battle between enjoying the music and wanting desperately to be in bed, and with each show the old lady in me tugs a little harder towards the latter.

Speaking of being an old lady: at 12:30 after standing in the suffocating and pushy crowd near the stage for two hours, I had had enough and abandoned my group to go hang out at the periphery. There, I could breathe, but I also felt rather hopeless and adrift. This was a really bad omen for the year ahead. Then a man who had lugged over a plastic chair for himself offered it to me to stand on instead, so that I could see the stage. And then the woman on the chair next to mine put her arm around my shoulder, commanded sweetly, “Il faut dancer!” and led me in a distinctly Senegalese dance move with her arm around me the whole time. Normally I’m all about personal space but the woman’s generosity of spirit – bringing me into her joyful fold when she saw I was deflated and alone – changed my mind about 2017. I decided that the omen before had been a false one, and that this was in fact the real sign. We are never as isolated as we feel, and things are never as bad as they seem.

Here’s the concert, if you’d like to watch. It was so good, as always.