Okay, time to wrap up the Vodoun festival, with my favorite part: the Revenant, also known as the Egungun. Several years ago, it was seeing the gorgeous (uncredited – sorry!) photo of Revenant masqueraders below that made me put the Vodoun festival at the very top of my bucket list, though at the time I didn’t know what they were called or anything about them, and I expected to see them throughout the festival.

In fact, they made only a few appearances, and only one of which I caught. On the evening of the 10th, a much smaller crowd of people than had been at the festival proper gathered in a dirt field in the center of Ouidah to watch the spectacle. From the moment I saw them I was transported with awe – although everything I had witnessed so far had been mind-blowing, these cultural masterpieces were what I had come for.

The Egungun masqueraders (all men – not that you could tell because they were covered up from head to toe) took turns either resting in a row of chairs near an opening in the ring of people, or walking around the center of the ring. Sometimes one of them would stalk around menacingly before breaking into a full run and charging into a crowd of people while whirling his outfit, whipping up dirt and sand, and forcing everyone to flee and/or team up to push him back. It reminded me of videos I’ve seen of the running of the bulls at Pamplona. I caught the very tail end of one of these rushes in one of the videos at the end of the post.

Other times they would walk dangerously close to the outer edge of the circle of people, and whenever they threatened to inch in among the audience, a “minder” would bark at them and hold them back with a stick.

Other times, they would jump and kick and flip over to the beat of drums or in time with the minders’ sticks. Now it felt less like a bullfight and more like lion tamers with their lions. 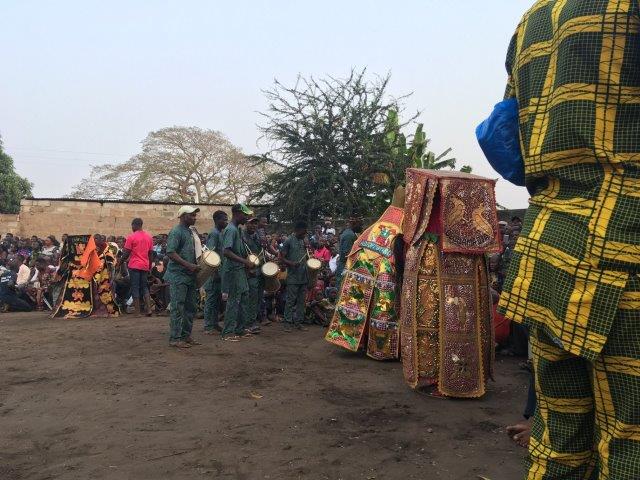 They had the most amazingly opulent outfits, many of which had hidden “special effects” that came out when the masqueraders moved in a certain way. 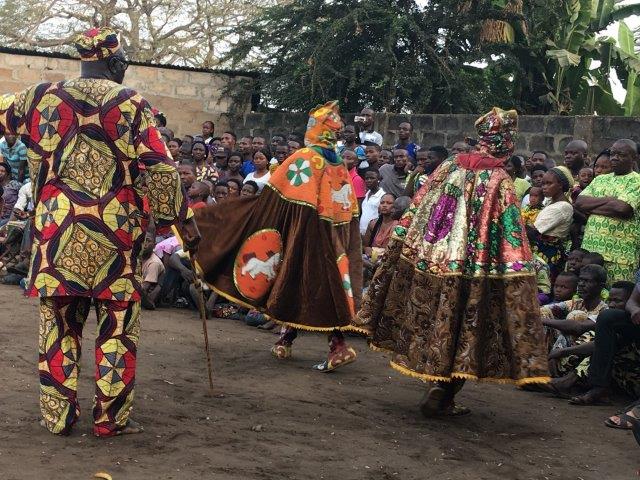 For example, the masqueraders above, who looked kind of like knights, could lift up their capes and twirl them around their head at dizzying speeds, so they looked like spinning wheels. And the masquerader below had flaps of fabric hanging off the back of his outfit, but when he popped them up in a certain way the whole thing transformed, and the masquerader’s head was replaced by a wooden one that appeared out of the folds in the fabric.

But the masquerader below was my absolute favorite, perhaps because he reminded me of that original photo I had seen. Right before I took this picture of him, he stopped short and started staring at me (well, who knows if he was actually staring, because I couldn’t see his eyes). Then he started walking slowly towards me, and I was both thrilled and spooked. His minder showed up and rerouted him just as he came within a few inches of me.

Someone had explained to me that during the Revenant, long-dead ancestors come back as spirits that possess the masqueraders, who fall into a trance and give up their body to the will of the spirit. It looked like they were trying to scare the crowd, and that the minders were in charge of keeping them at bay, but then I read in the New York Times article I kept referencing yesterday: “touching a revenant during a trance, it is believed, can be fatal.” And according to this stunningly beautiful photo collection (with photos and video a million times better than mine), “Egungun is a dance performance that opens a portal between the realm of the dead and the living.  During the dance, the ancestors send blessings to the spectators and the entire community.” So maybe it is not that the spirits are malevolent but rather that the masqueraders’ trance-like state can make them do unintentionally violent things.

My videos from the Revenant are below. I’ll pick up again with Ouidah for the next installment, but it will focus on the town’s history as a center of the slave trade.

2 thoughts on “Benin: Ouidah for the Revenant”