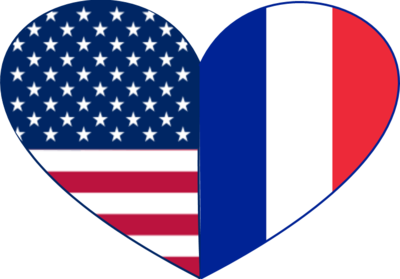 Over the years, I’ve gathered a few highly subjective observations about what it’s like to be romantically involved with French men as an American woman. I’d been waiting to share them until enough time had gone by and enough men had been dated to ensure that none of the people in question would be able to identify themselves. I had also been waiting to hit some critical age and self-comfort level at which I would no longer care whether everyone on the Internet has access to my private life. I’m realizing I will never reach that age or comfort level – and yet I still want to write about certain things that have amused or perplexed me.

So I will. I will just be as vague and discrete as possible – which, I fear, is not very much. Anyway, on with it.

Let’s start with French versus American ideas about dating. I always hear French people say that Americans are so different from them, for two main reasons: we go on dates, and the French do not; and we always need to “define the relationship,” and the French do not. In practice, this is just not true, and it leaves me confused what French people are talking about. Every time I’ve gone out with a French person, it’s proceeded the same way as with Americans: one of us asks if the other wants to get a drink or some other activity, and then we go, and then we get to know each other, and if we like each other we keep seeing each other, and then we round the bases, so to speak, at whatever pace and point we feel like it, without any formal conversation about the relationship until we either want to make it more serious or end it.

I’ve always felt that I’ve been on the same page about dating with the French people I’ve gone out with. But I think the French imagine us going around asking, “Would you like to go out on a date?” and if a bunch of dates go well, proposing, “Would you be my boyfriend / girlfriend?” Maybe that’s why they think dating is different, even though it’s really not.

That said, my own misunderstanding of French dating mores has led me astray at least once. I had heard that while Americans find it perfectly normal to date multiple people at the same time for long stretches, French people will usually date someone exclusively after the first real kiss, as a matter of respect. I started dating someone I really liked shortly after arriving in Paris. He seemed to like me, too, but he did not kiss me for four dates, which nearly killed me. I thought about just going in for the kiss myself, but then I worried, “What if he hasn’t decided if he wants to restrict himself to me yet, and I force it on him by kissing him?” It was a ridiculous fear that we laughed about later, when he admitted that he had just been really wimpy about making a move. Crushes make people act in strange ways.

So let’s turn to crushes…

As it turns out, greenish-blue eyes on a French man is basically my Kryptonite. There have been a statistically significant number of times when French people with particularly beautiful eyes and particularly beautiful accents have spoken completely innocent words to me, and it has felt like a sex act. Between the sound of their voice, the power of their ease with a language I find difficult, and the thrill of trying to keep up, I’m a million times more into them than I would be if they were speaking English with an American accent. I’ve often had to remind myself: “Ruth, they are opening their mouth and letting words come out in their native language the same way you speak English without a second thought. This does not make them especially sexy or skilled. Do not give them extra points just for being able to talk.” But I do.

While it is undeniably sexy to hear French in bed, it is also mortifying when you don’t understand it. For me it begs the question, “Should I really be in this highly intimate situation with a person I can’t even communicate with?” But to be fair, when people are doing sexy things, they tend to speak in sexy voices. And those sexy voices are usually several octaves lower than their normal speaking voices. While it’s totally normal not to catch everything that someone says to you – especially when they’re whispering – this particular time does not feel like the best occasion to ask someone to enunciate. So, when these situations have arisen, I’ve usually just responded with my most coy conspiratorial smile, and hoped that it wasn’t a question.

The potential for embarrassing miscomprehension goes both ways, of course. It seems like a cruel joke that one of the most utilitarian words for bedroom situations contains, in French, one of the most impossible to correctly pronounce vowel clusters. While I’ve subjugated my ego enough to become okay with regularly butchering French words and repeating myself six times before people understand me, I draw the line at doing so under the circumstances during which this word would prove most useful.

In addition to my fear of not being understood, it always felt strange to me to speak in a non-native language while engaged in primal acts. How can you give everything up to instinct and desire when you are doing even the smallest amount of work to find the right language to communicate with? So I tended to default to mute, which felt about as fun as it sounds.

And if that’s not oversharing enough… let me conclude with the most personal and awkward musing of all. Let’s say that you were an American having “relations” with a French person, and they kept saying, “Oww.” You would lighten up whatever you were doing, right? But what if every time you went a little easier, the person kept saying “Oww” anyway? You might feel pretty incompetent, and eventually work up the courage to ask, “Am I hurting you?” The French person might then give you a confused look and say, “No.” So you would try again, only to be met with the same “Oww.” And then you’d get frustrated. It would take a little bit of a Laurel and Hardy-like “Who’s on First” routine before the French person might finally realize why you were asking your seemingly out of left-field question. Then he would remind you that in French, when something hurts they say, “Ay,” not, “Oww,” which leaves “Oww” wide open to be used for other things.

Suffice it to say I’ve lived through my share of French dating mishaps and that’s just the tip of the iceberg. As ill-advised as my misadventures may have been, though, and as much as I behaved like an insane person during many of them, I regret nothing. Except possibly writing about them publicly…

2 thoughts on “Thoughts on Franco-American relations”