This post will cover two different excursions in the same general geographic vicinity – one was a full-day outing to Karen, a beautiful and posh suburb of Nairobi, and one was a half-day trip to the Ngong Hills, which are just beyond Karen. Both places were refreshing and delightful.

On the first official day of my vacation, I took a taxi with a Kenyan colleague to the base of the Ngong Hills Nature Reserve. We climbed up a steep hill past herds of sheep with tinkling bells. 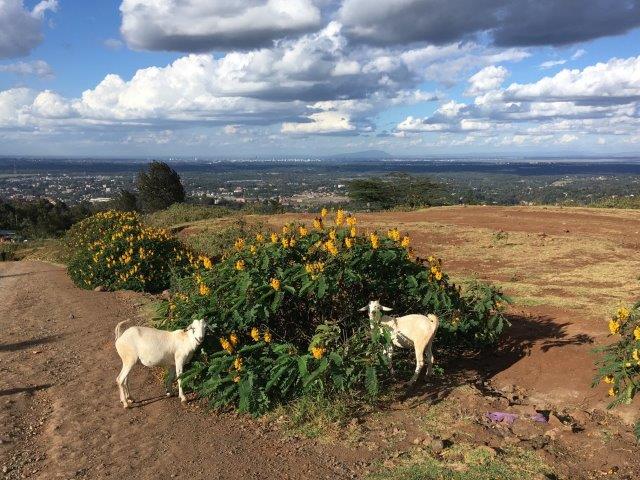 My colleague, Esther, explained to me that herders bring the sheep here to munch on grass during the day, and then they take them back down the hill to their respective homes at dusk.

About halfway up the hill, we arrived at our destination, Kompass Restaurant. The lunch options are snack bar-esque but the views are Sound of Music-esque. On one side, you look out over the Great Rift Valley… 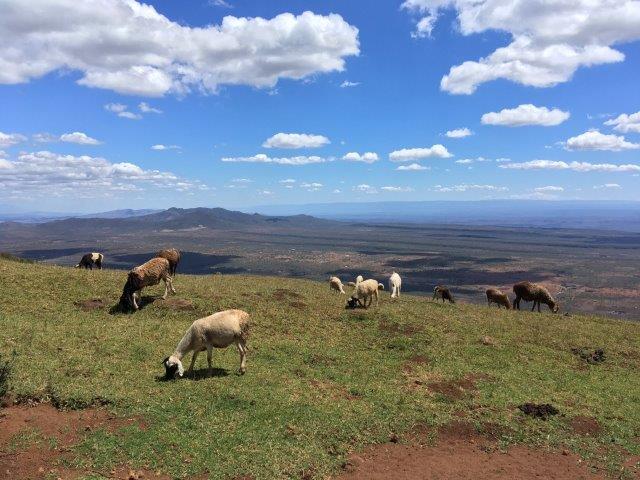 …and on the other, you see green, green, and more green that eventually gives way to Nairobi and then to more mountains in the distance. I soaked it in like the life-giving force that it was.

Cut to a few days later, at the tail end of my vacation. I headed back to Karen for a full-day excursion with Esther and another woman I met on the Masai Mara safari I had returned from the day before.

Karen is home to the Sheldrick Wildlife Trust, which rescues and rehabilitates orphaned elephants and rhinos so that they can be (hopefully) returned to the wild. At 11am every morning, you can visit during baby elephant feeding time, and if you’re lucky you can pet one of the little guys.

Despite the repeated instructions for the audience to be silent so as not to frighten the elephants, there was a steady stream of barely suppressed squeals. It’s sort of inevitable when a (relatively) teeny elephant is on display drinking formula out of a baby bottle. 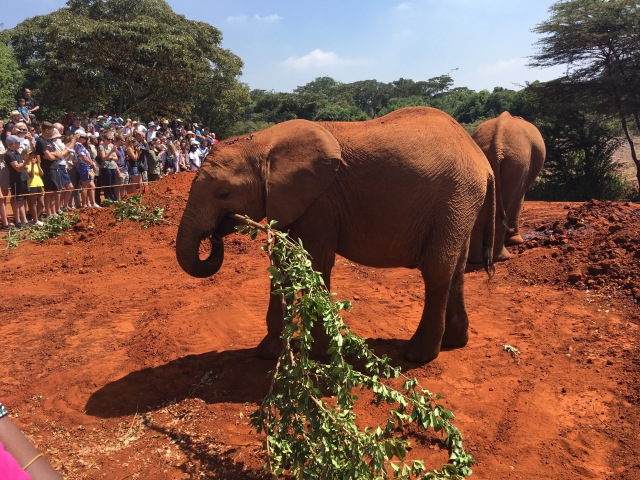 I got to hear more elephant chewing sounds, which I think is one of my favorite sounds on the planet. The Sheldrick Wildlife Trust should consider doing ASMR videos, to heal humans as much as elephants.

They played around in the mud a lot, and all bets were off. People giggled and squealed with delighted abandon.

Next stop was the Giraffe Center, where you can feed the Rothschild giraffes in their care. We passed the Giraffe Manor on the way in, and I realized that the hotel of Instagram legend — which has a whopping $800-something per night price tag — is on the same property, which means that those suckers are paying $800-something more than I did just for a manor house backdrop (well, that and a really nice hotel stay). You can get the same exact giraffe-at-eye-level experience right next door at the Giraffe Center, with the same population of giraffes, for about $15.

Their heads are really much more humongous up close than you realize when you’re looking at them from the ground. Also, their tongues are much more sand-papery and covered in slime than one would expect. We were each given a little bag of food pellets to feed them with and every single time one licked a pellet off of my hand, I got slimed.

From there we went to lunch at Talisman, which is set in a beautiful garden and has delicious food — the best I ate in Nairobi and vicinity.

Then we stopped for a quick trip to Kazuri beads, which became a longer trip when we realized they give free tours of the workshop. The company was started by an ex-pat in the 1970’s. They have since grown from three to 340 staff members, most of whom are single mothers and/or from low-income communities.

We saw how they form and glaze the beads…

…as well as how they fire them.

And then we visited the gift shop, where I bought some candle holders decorated with beads, and a couple of little jars (they make ceramic tableware as well). I didn’t buy the wall hanging below, because it was way out of my price range, but isn’t it beautiful? Note the dancing people and animals within.

After that slight detour we hightailed it to the Karen Blixen Museum for one of the last tours of the day.

Karen Blixen aka Isak Dinesen is the writer of “Out of Africa,” her memoirs of the years she spent on the farm that once covered almost all of what is now the suburb of Karen. On the small parcel of land that is left of the property, there is still some farm equipment from the time. 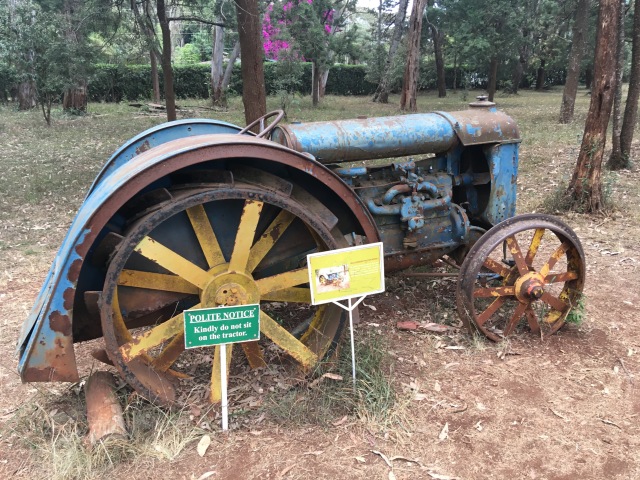 The inside of the house, where photography is not allowed, looks similar to how it was when Blixen lived there, because the museum bought back much of the furniture that she sold when she left Africa.

Both the inside of the house and the grounds are beautiful.

From the side yard, there is a view of the Ngong Hills that during Blixen’s sojourn was much more uninterrupted and expansive. Every single time I caught that view, I heard a Meryl Streep-like voice in my head, intoning, “I had a farm in Africa at the foot of the Ngong Hills,” and then a shiver would pass through me. Eventually, the shiver subsided and annoyance set in. It happened like twenty-seven times. 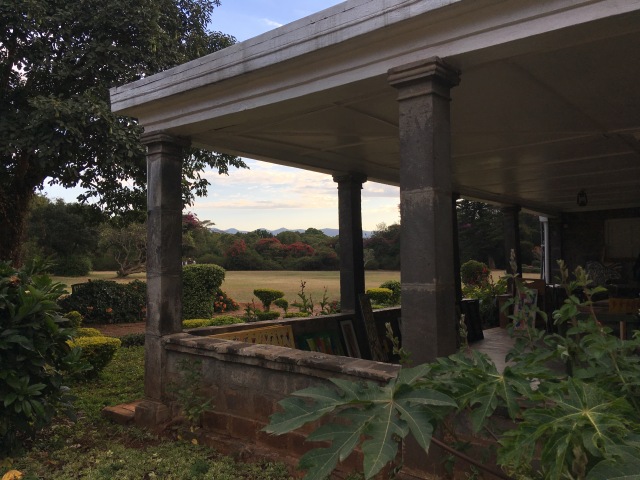 And that, in a nutshell or maybe a little more, is Karen and the Ngong Hills. Gorgeous, stunning, I would even say magical.

And topped only by the splendor that was my two days in paradise at Lake Naivasha. That is coming up next, along with Hell’s Gate (which, despite the name, was also heavenly).