I feel like Annie. Every five seconds something prompts me to sing to myself, “I think I’m gonna like it here!”

I haven’t seen much of the city yet because I’ve been busy acclimating to the day to day, taking French classes, and writing two video proposals. But little by little I’m expanding my Dakar world. I stuck to a four-block radius for the first three days but on Thursday I finally struck out further. A fellow student took me on a twenty-minute walk to the oceanfront road called La Corniche to go to the gym and run on the treadmill. Which is hilarious because I never stepped foot in a gym in the United States and now I’m excited about going to Zumba classes in Dakar.

Aside from a very busy Saturday that I’ll share photos from soon, my days so far have consisted of walking from my house to my school (three blocks), to the supermarket for snacks (another three blocks), back to the school to use their wifi, back to my house for a late dinner and maybe some TV time with my host “parents” and “siblings.” After that it’s off to bed. Ironically, I feel more like an American suburban teenager here than I ever did at home.

A few assorted things – about Senegal and about myself – that have stuck out to me during this first week:

I’ve realized why I was so thrown off by the Consulate staff in New York. It wasn’t their accents, it was that they were speaking Wolof but with a few French words tossed in here and there to utterly confuse me. The Senegalese seem to switch back and forth between Wolof and French fluidly within the same sentence, the way people in New York speak Spanglish. Fortunately, this is not as big a concern as I would have imagined because when it’s me who’s in conversation with people, they know I don’t speak Wolof and they stick to French.

The family with whom I’m staying is wonderful, their house is lovely, and every night they include me in their dinner table conversation, which is the best French practice I get here, not to mention a great introduction to Senegalese culture. That said, learning the cultural ropes while dealing with linguistic barriers and living in someone else’s home can feel pretty awkward.

One notable example: The food is almost uniformly delicious. If there’s such a thing as a country’s cuisine being your “style,” then Senegalese cuisine is definitely my style… Except for one exceedingly pungent fish dish, which my hosts served at lunchtime the other day and which was not, to put it mildly, à mon goût. Since I eat lunch alone, I was able to “disappear” the fish, but then I was afraid that my empty plate would give the impression I would love to have this meal again. So at dinner I explained as politely as possible that the fish was too strong for me. They didn’t understand what I meant and I spent the next five minutes grasping for ways to kindly but firmly reject a plate that seems to be both beloved and ubiquitous here.

Senegal is very gluten-free-friendly because rice and millet are the staple crops. The main problem is at breakfast when everyone eats a baguette, but I found some rice cakes at the supermarket that I cover in Nutella or the Senegalese version – Chocopain – every morning. Chocopain is definitely à mon goût.

There’s been a cold snap that apparently started right before I arrived, which combined with the crazy windiness is making it much cooler than I thought it would be, especially at night. (I assumed the winds were the harmattan I’d read about, but then I was told that those are very hot and dry and dropped off a few weeks ago.) I’ve been wearing the only piece of warm clothing I packed – my lightweight puffer jacket – to bed, though I still wake up shivering. Who would have thought I’d be more freezing here than in subzero New York?

The mosquito net over my four-poster bed is a pretty good substitute for the frilly canopy I always wanted but never had as a kid. Apart from the cold, I am quite enjoying my princess bed.

I did not grow up with the Muslim call to prayer but there is something so familiar and comforting and calming about it – even when it wakes me up at six in the morning. I was also quite touched (and unsure what to do) when on Friday at 2:30pm-ish as I was walking down the street, everyone stopped what they were doing and lined up on the sides of the road in front of their mats, heads bowed as mosque megaphones blared out prayers. 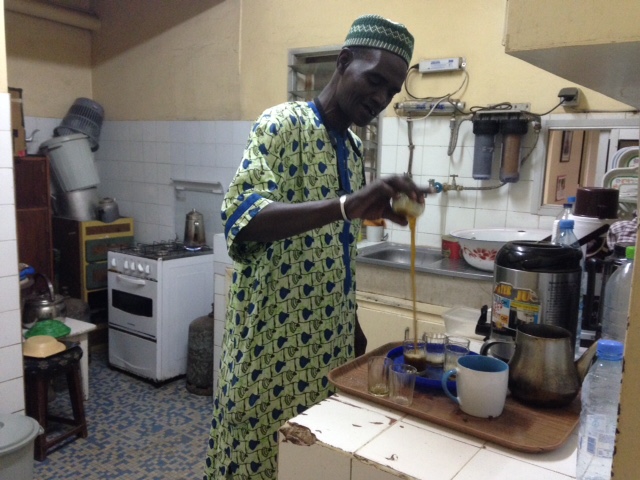 My French is ridiculously bipolar. Some days the words flow easily and relatively correctly. Other days I’m so tongue-tied that I grasp for even the basic pleasantries to start a conversation. Spanish is also getting in the way even though my French is a million times better. Muscle memory prompts me to want to greet everyone with “Hola,” so there’s been a tiny pause before every social interaction, during which I remind myself which language to speak. One morning I hit a new low and told someone “Au revoir” instead of “Bonjour.” It was like my brain short circuited from information overload.

On that note… I’m off to bed to give my head a rest, so au revoir and bonne nuit.

[The top photo is the first one I took in Senegal, from my taxi window. The bottom photo is of Samba, who works at the language center, preparing everyone a special afternoon tea that is both very bitter and very sweet and quite a process to make. He was dressed in traditional clothing for Friday prayers. I’ll share more photos later. The Internet here is too slow right now to upload anything else.]

5 thoughts on “Impressions from one week in Dakar”