I haven’t had much time to devote to this blog since being back in New York, but I recently found a nearly complete post that I wrote two or three years ago in my drafts folder. I dusted it off, and here it is for your reading pleasure until I have time to write something new:

The online sale for an in-demand concert was about to begin, and I knew it would be tough to snag tickets. As I waited anxiously, itchy trigger finger hovering over the Return key until the appointed moment to click furiously and hope for a miracle, a memory came rushing back.

END_OF_DOCUMENT_TOKEN_TO_BE_REPLACED 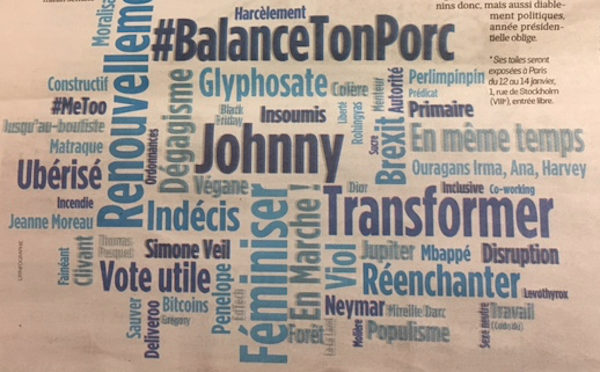 20 forgotten English words that would be useful today.

A world map with countries’ names in their official languages.

New State Department travel advisories make it easier to see how they rate a country’s safety. (Note: I would take them with a grain of salt; their travel advice tends to be about as risk-averse as your average Jewish mother’s.)

The New York Times’ first “52 Places” traveler answers questions. She sounds great, and I love her answer to, “What is your greatest hope for the trip?”

And, an older article I don’t think I ever shared here: a heart-wrenching story of theimpending extinction of an Amazonian language and the pain felt by its last speaker.

Also late, Le Parisien’s words of the year word cloud, in the photos above and below. I found it an interesting window onto French culture.

And really, really late (18 years to be exact), an old This American Life program I recently revisited, about Americans in Paris, featuring a hilarious-as-usual David Sedaris. I have a new appreciation for this episode since being an American in Paris myself.

Two weekends ago when I came into the city for a 24-hour visit, I went out to lunch on the Upper West Side. Within a minute of my first gulp of NYC air, I crossed paths with someone I knew. While stepping into the restaurant, a man I had had a nice conversation with nearly ten years ago walked out. He had been the executive director of a non-profit I greatly admire, and I still remember his face.

Then, last Thursday afternoon, I made my move back to the city. The following morning, I was watching the NY1 morning show and a story came on about the rapid development of Long Island City, a neighborhood in Queens. I did a double take at one of the people who was interviewed for the “man on the street” soundbites. It was Charlie, a window washer in the skyscraper where I worked for five years until 2015. He is the friendliest guy and I used to love asking him questions about his craft, which consists of dangling out of windows forty stories high to clean the glass. Funnily enough, I also spotted him one summer many years ago, on Orchard Beach in the Bronx (far, far away from both Long Island City and midtown Manhattan where our building was). He was walking around with a boombox, shirtless and glistening in the sun, and I pretended not to see him because I didn’t want to snap him out of his leisure element.

Then, the very next day, I went to the women’s march with my high school friends. The streets were packed with people – the New York Times estimated that 200,000 people were there. My friends and I wedged ourselves into the sea of marchers and started inching our way along. After about a block, I looked directly to my right and noticed that I had been walking alongside a freelance filmmaker with whom I have worked on several video projects (for the same organization that was housed in the building where Charlie worked). We jumped in recognition and shock – what were the chances?

And what were the chances that I’d run into (slash spot on TV) three people I know over the course of my first four days in one of the world’s biggest cities? It heartened me, maybe even more than the joyous, raucous march (during which we happened to get into formation behind the Rude Mechanicals marching band, who provided an amazing soundtrack for our six miles of dance-walking). 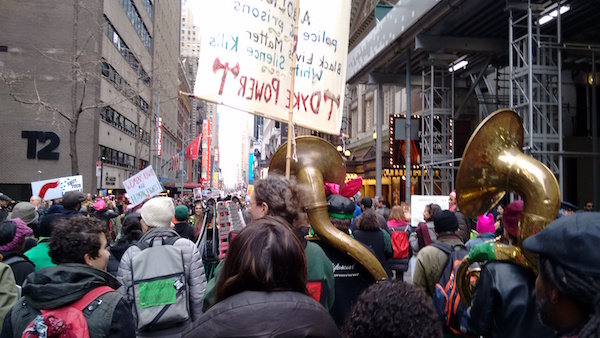 Perhaps I have (much) more to look forward to in New York than I give it credit for.

I am moving back to New York on Thursday and I’m excited to (re)start there with a bang: a social gathering, a party, and a protest all within the first weekend. But beyond that, I can’t say I’m enthused about heading back. In fact, I was in the city overnight last weekend and though I was very happy to hang out with friends, New York itself did nothing for me. I did not feel even a slight thrill to be back amongst the skyscrapers and yellow cabs and sidewalks overflowing with people. Just a resigned, “Alright, fine, let’s do this.”

So… clearly I need an attitude adjustment and to remind myself of what I have to look forward to in the city. Off the top of my head:

I suppose that was somewhat refreshing…

I won’t bother listing what I’m not looking forward to – what’s the point of being negative about it?

It won’t take me long to fill you in on what I’ve been doing in 2018. I got sick within hours of stepping off the plane on New Year’s Eve and spent the following week on my parents’ couch in the suburbs. I find it ironic that after months of saying I could not wait to close the door on 2017, I started the year in the least fresh way possible, dragging all of last year’s germs into 2018 with me.

I’m feeling better now, though my brain turns to mush in New Jersey and it seems like I have to wade through life force quicksand to get anything done.

Case in point, this post took me like six hours to write, over the course of two days. And it doesn’t even have a point, except to say hello after a few weeks of silence.

So… Hello! I hope your new years are off to wonderful starts.

I’ll be back when I remember how to string words together into sentences.