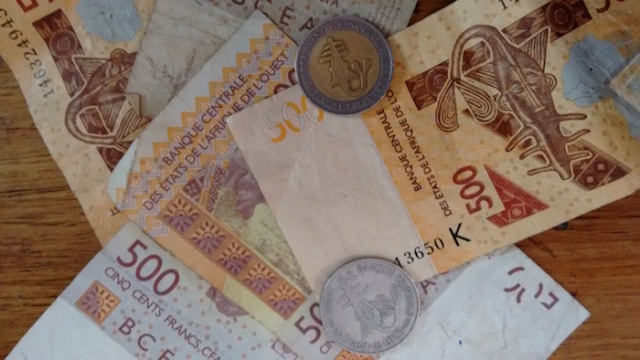 Senegal has a problem with change. I don’t mean the abstract kind, which is hard for anyone. I mean money. No one here EVER has change for anything, and yet change is needed for everything. It’s a classic Catch-22.

At the grocery store, I tried to pay with a 10,000 CFA note (around $20) for a 4,950 CFA purchase. They asked me whether I had 50 CFA, and when I said no, they gave me a 5,000 CFA note and 50 CFA worth of candy and sent me on my way. Another time they overpaid me more than 200 CFA because they couldn’t make correct change. This Monday I was running late to catch a cab uptown when I realized I only had large bills. I rushed to the store to buy something in the hopes they’d break a 5,000 CFA note (because while grocery stores rarely have change, taxis NEVER do). No such luck.

I took a taxi anyway, and then spent ten minutes at my destination waiting with the driver as he flagged down passersby asking for change. No one had any. Finally the woman I was going to visit spotted me the 1000 CFA I was short. After our meeting, I hoped she would tell me not to worry about repaying her, not because I am a freeloader but because I knew what a hassle it would be. But nope, she wanted her money.

So, I stopped in at various bodegas on her block to buy something, anything, in exchange for monnaie. (This word was not in my vocabulary before Senegal, but I am sure it will now stay with me until my dying day. Perhaps it will even be my “Rosebud.”) It wasn’t until the third store that I was able to get my hands on four beautiful 1000 CFA notes, which makes no sense, because all three of them sold nothing but cheap products. They should all have had a plethora of small bills and coins at their disposal.

I never took an economics class in my life, so I have no idea what a distinct lack of small change means for a country’s financial situation. I just know what it means for me: constant suppression of the bemusement-frustration mix that has come to be a hallmark of my time here. (Or rather, constant mental effort to tip the balance more heavily towards bemusement.)