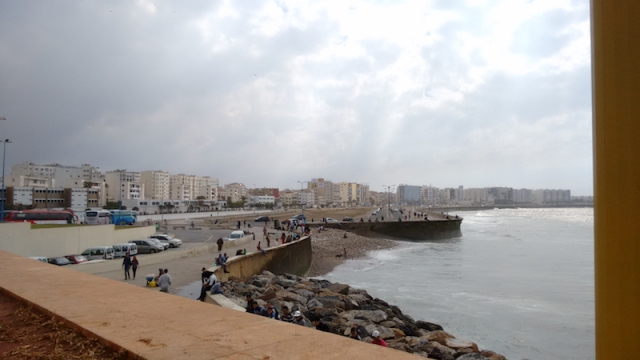 I had been told that Casablanca’s Hollywood image is completely at odds with its actual sprawling ugly blandness. So I was surprised to find it neither sprawling, ugly nor bland. In fact, it was an Art Deco wonderland.

But before I discovered that facet of its beauty, I hightailed it from the train to another stunner, the King Hassan II Mosque, believing that the last tour for the weekend was at 4pm. (It wasn’t.)

I got there at 4:05 and rather than wait for the next English-language tour at 5, I joined the 4:10 French tour. When I was in Buenos Aires I did the same thing with a Spanish-language tour at the opera house, and thus I know nothing about the opera house. But I was overjoyed to understand pretty much everything this tour guide said about the mosque’s history and construction. I’ve already forgotten most of the details but the essence is that no expense was spared in making this mosque the most colossal superlative structure in the Muslim world. 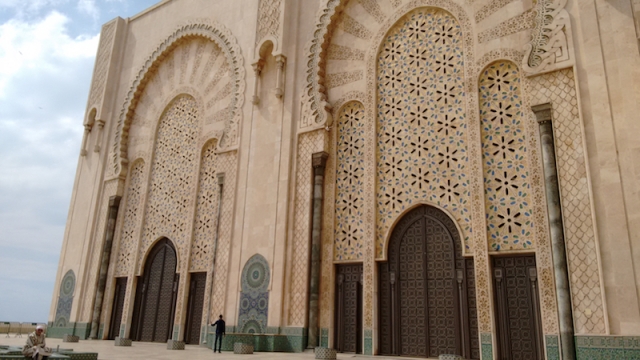 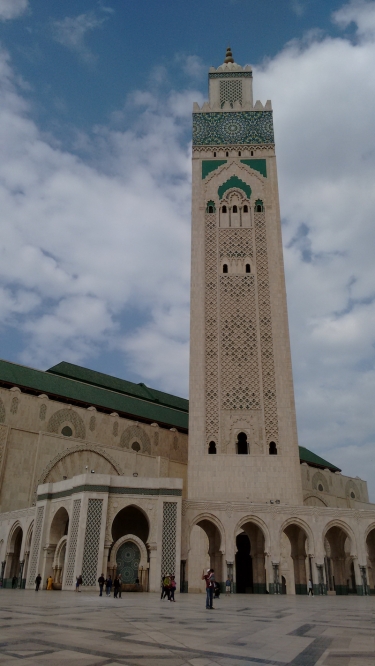 None of my photos could accurately capture a grandeur and majesty that you can really only appreciate in person, but here are some bits and pieces of it: 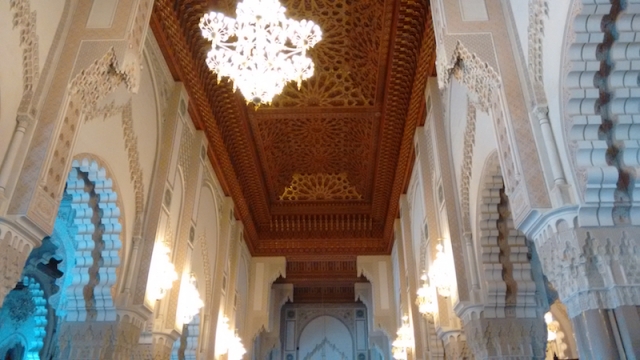 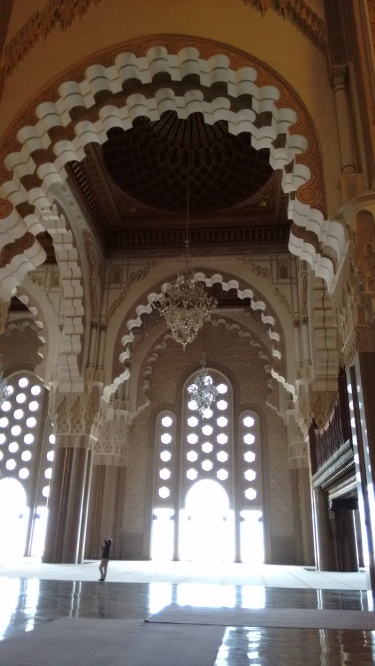 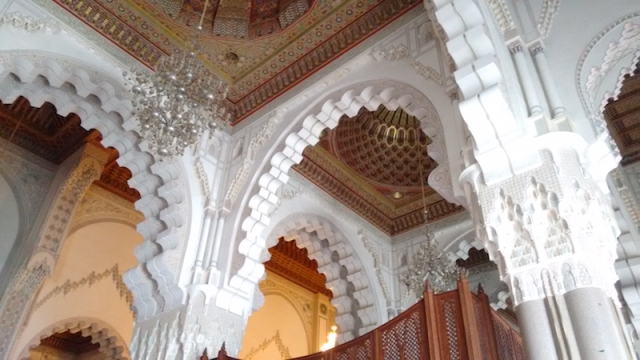 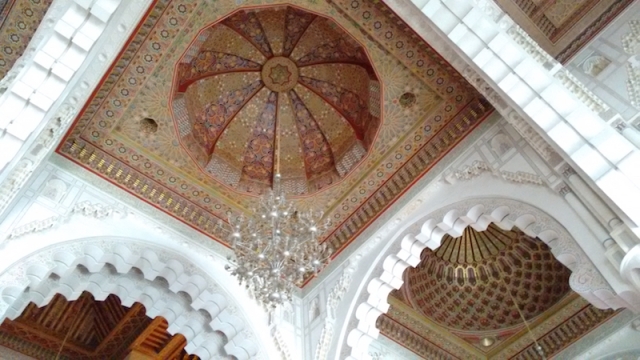 The only thing on my agenda after the mosque was to do a walking tour of Casablanca that Jenny had done and enjoyed when she was there. I didn’t realize until I started the tour that Casablanca’s architectural gems are almost entirely Art Deco (and Art Nouveau, but I’ll just call it all Art Deco for simplicity’s sake). Art Deco happens to be one of the things that makes my life worth living. That’s an understatement. Art Deco makes me feel like I may never know the meaning of life, but it doesn’t matter so long as I get to experience the transcendent pleasure of utilitarian structures imbued with jaw-dropping man-made beauty. Or something like that.

Anyway, my love for Art Deco is why you are about to see 50% and not 5 of the buildings that made me gasp along the walking tour (which I expanded to cover every last street in the neighborhood). I just couldn’t reduce them to a smaller sample size. 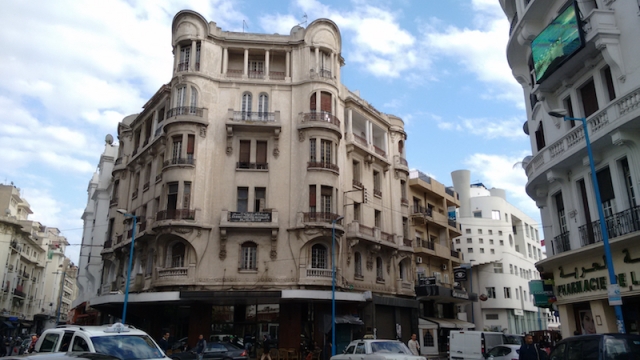 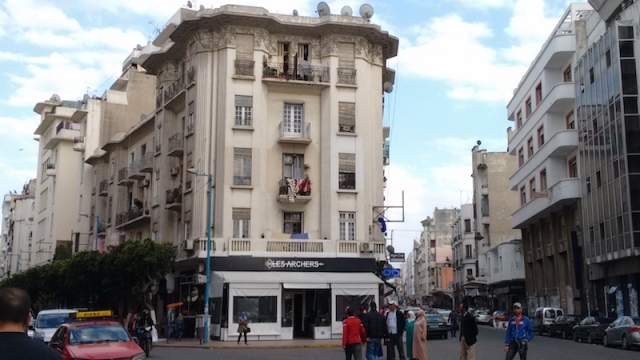 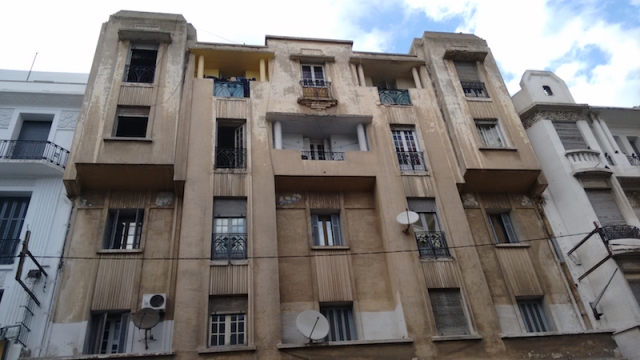 The tilework on the molding near the roof of this one looked like a Tiffany lamp. 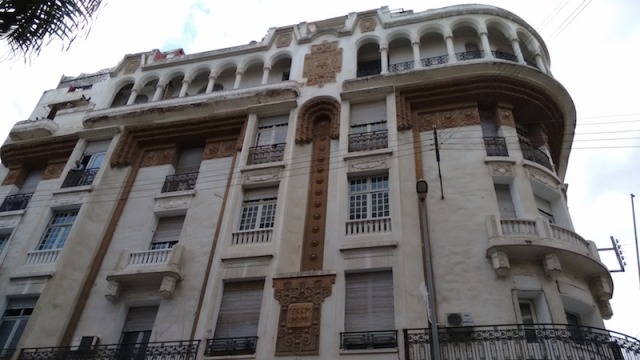 And look at the iridescent mosaics on this one!

The metalwork on the doors blew me away. They were like the gates of heaven.

Though these were more like the gates of an early 80s goth club.

Look at the typography!

Not to mention the crazy glasswork.

This building especially delighted me. 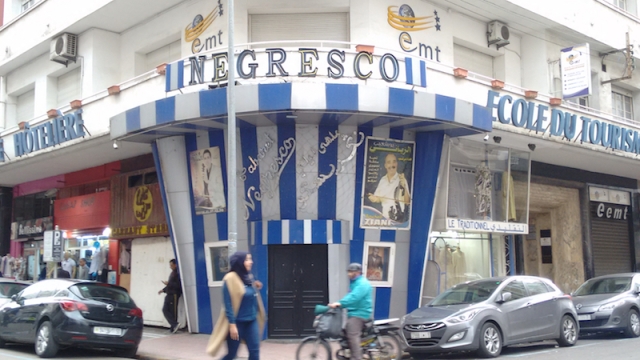 And this one… The display seemed expressly designed as a sucker punch to the tourist gut. But I 100% fell for it. I took this picture while smiling from ear to ear. 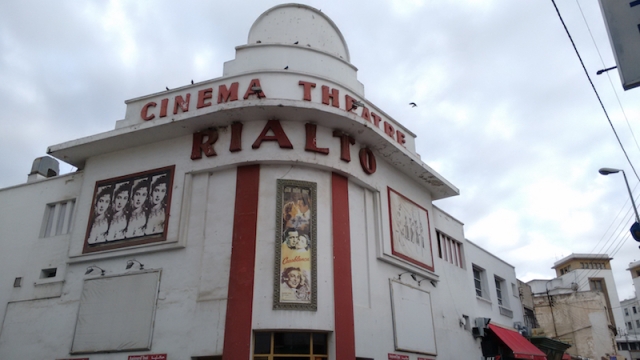 And here is the entryway in which I began to weep.

This is the second time in a year that an Art Deco building has made me cry. (And I can’t recall it ever happening before that, so maybe I am just getting soft in my old age.) When I was in Havana, this is the one that did it. 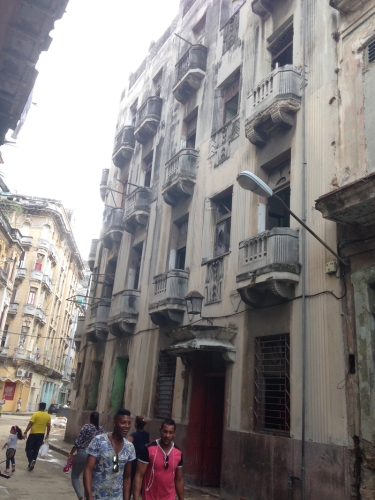 I stopped in my tracks in front of it, gaped, and then walked on for about a block, but I kept looking back and I am not lying when I say that this particular building was animate and called me back to it with an actual voice. As I stepped in front of it for a second time, tears started unexpectedly falling, because it was like coming face to face with a living ghost, from my grandmother’s era. This once-glamorous show-stopper was now ravaged with age, but there was still a dignity and grace and beauty about her. In fact, the contrast between her gorgeous lines and her ragged materials only added to her intrigue. Because she had never been given a facelift, she was a pure unadulterated portal to the past. And what a past. This building, wedged inconspicuously between others a little less fancy but with the same general patina, had witnessed jazz age opulence, the 50s high life, a David vs Goliath revolution, and decades of austerity and struggle. She had been populated with the richest and the poorest of her country’s people. Though she had been built to dazzle, she was left to rot – but she was so badass that she just kept standing, both an homage to and a microcosm of Cuba’s resilience. It was haunting. 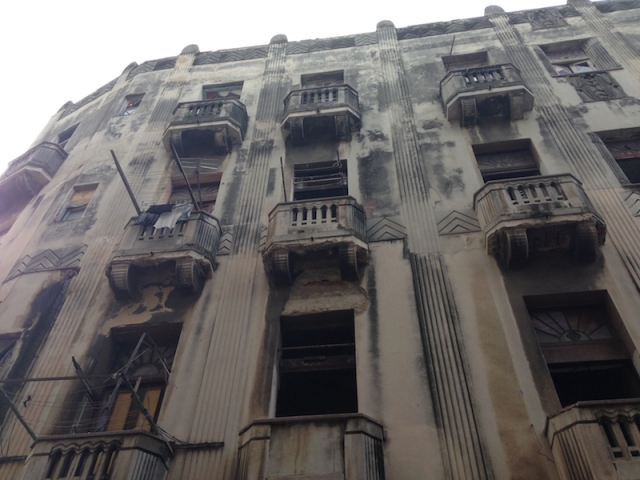 Ahem. So that’s the same thing I felt when I walked into the decaying entryway of the building in Casablanca, and saw that proud but crumbling staircase on which I could clearly envision the now-dead once come bouncing jauntily down.

I walked around in a state of rapture for two or three hours, discovering new beauties on every street I wandered down. When it started getting too dark to see the buildings, I returned to the hotel by way of a detour through Casablanca’s medina.

And that was that. Vacation over. The next day I flew back to Dakar, and within 24 hours of landing I was on a plane back to Casablanca… but this time headed for the final destination of Monrovia (via a ridiculous flightpath).

Join 1,264 other followers
Follow talk foreign to me on WordPress.com