Since I was there in a professional capacity, I spent most of my time in Liberia working, i.e. filming, or in a car on my way to film something. I didn’t take many photos, and everything runs together because we were constantly on the road. So, it’s hard to form a linear narrative. Instead I think I will just post a bunch of photos (many taken from inside the car – sorry!) and impressions and call it a day, aside from one other post with some additional random thoughts, if I get around to writing it before I leave for vacation tomorrow…

The shoot started in Monrovia.

I don’t think the picture does it justice, but this building was so ominous that it made me shiver as we passed by. Fitting, since apparently it was / is meant to eventually house the Ministry of Defence (sic).

Signs, literally and figuratively, of the fight against Ebola were everywhere. The country was declared officially Ebola-free in January, only to face a flare-up in April. I was there in May, when there were no longer any active cases but the country was in a 42-day period of “heightened surveillance” before they could regain Ebola-free status.

There were people manning (Ebola) checkpoints at every county line, but they would lower the rope when our car approached, and we drove right through. 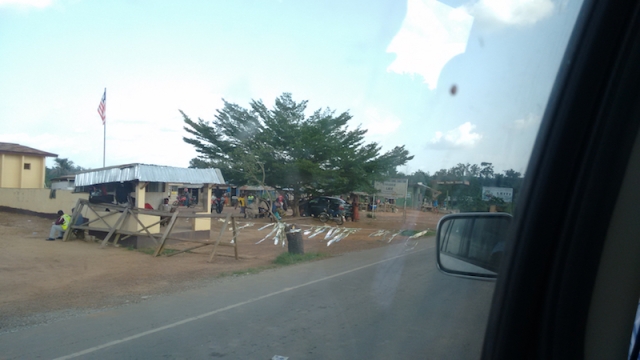 I heard that it was way more intense – i.e. getting out of the car and having your temperature taken – when there were active cases. (It was still pretty intense in other ways. The first thing I encountered when I stepped off the plane in Monrovia was a man with a digital thermometer, and before I could enter the baggage claim area I had to pass by some sort of video-operated thermal detector. Every public building had a tap bucket filled with water outside so that you could wash your hands before entering, and there was hand sanitizer on every tabletop in town. I also had my temperature taken before being allowed into the hospitals and clinics where we were filming.)

After a few days filming in and around Monrovia we hit the road, heading for the four most remote counties of Liberia, in the south. 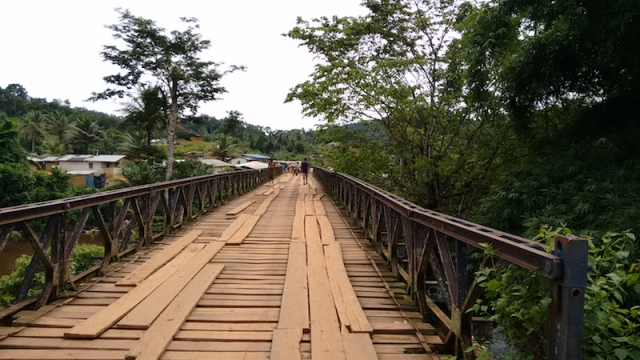 We traversed the ricketiest of bridges, like the one above and the one below, which was in such bad shape that we had to walk over while the car and driver went solo, jostling the logs out of place as the wheels rolled over them. 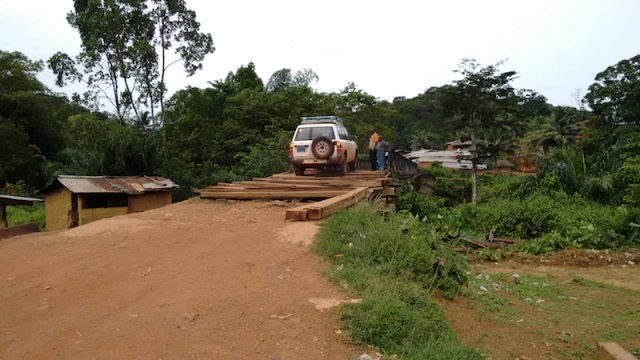 We bumped our way down uneven dirt roads that served as the major / only thruway and watched in awe for five minutes / sat in boredom for two hours as our driver macheted a new path out of the roadside jungle, to get us around two trucks that had sunk a foot deep on a stretch of road turned to mud by a torrential downpour.

I don’t know if you can tell what is going on here.

These people were using the defunct rail line for transport of their retrofitted “train car.”

The car had a lever at the back that they were pumping to get the wheels to turn and propel them down the track. I thought it was a pretty ingenious way to get around the problem of lack of fuel and lack of roads.

Another problem: lack of electricity. There isn’t much, if any, power grid outside of Monrovia. Everything seemed to be operated by generators, which, due to the expense of fuel, were only used at certain times and in certain places. So, people come to charging stations like this one to recharge their phones.

And as for the fuel… here’s a typical gas station. (Not sure if they ran out of gas or were closed for the weekend.)

Here’s another, with actual gas for sale.

Everyone was bemused when I wanted to take a picture and shocked when I said I had never seen a gas tank filled up this way before. 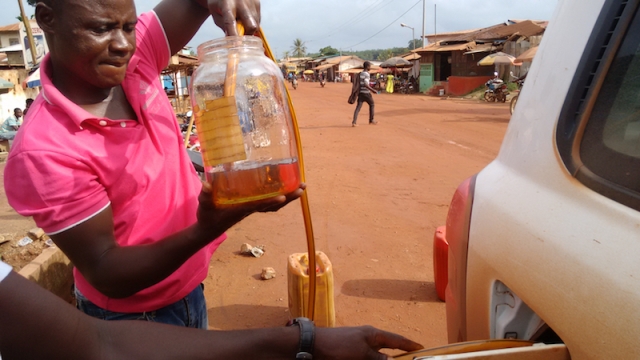 Most people live on less than US$2 a day in Liberia, yet fuel costs about the same there as it does in the States. In this and many other ways, daily life seems incredibly challenging for Liberians.

So I found this gas station name particularly poignant.

And I could understand why these $ building blocks were so popular.

Here are some kids in their school uniforms having breakfast in a little shop next door to that building.

A street scene in a town. 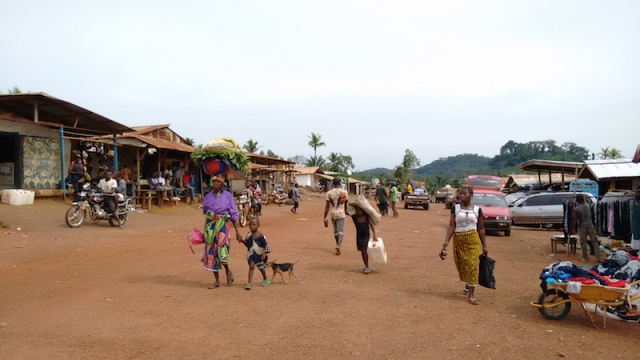 A street scene in a village.

One day, the four Liberians I was working and traveling with asked me if I was religious and I said no. They responded (nicely) that in Liberia they call people like me pagans. I sort of loved that. It was ironic timing, because the very next day I inadvertently observed the sabbath for the first time since I was a kid visiting my Orthodox Jewish grandparents in Brooklyn. We had a couple of days off from shooting and were staying in a small town for the weekend. The guest house’s generator had turned off at 5:30am that morning (taking the fan and therefore my sleep with it), my laptop had long since run out of batteries, the heat was way too stifling in my room to take a nap, it was also way too hot and muggy to spend much time outdoors, and the one place in town to get food was closed.

So, I watched these ducklings follow their mom around the yard.

I sat at a roadside kiosk marveling at how my colleagues could drink hot tea in 100-degree weather. 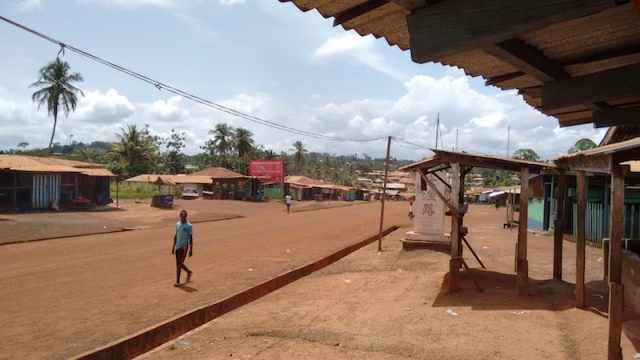 I ate a lunch of rice and greens picked from a nearby field. 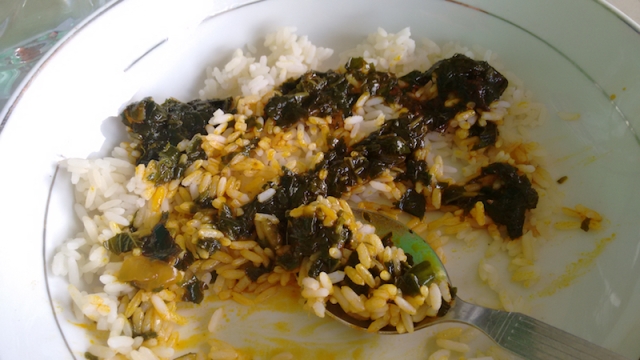 I chit chatted on the shady porch with my colleagues and the family that owned the guesthouse. 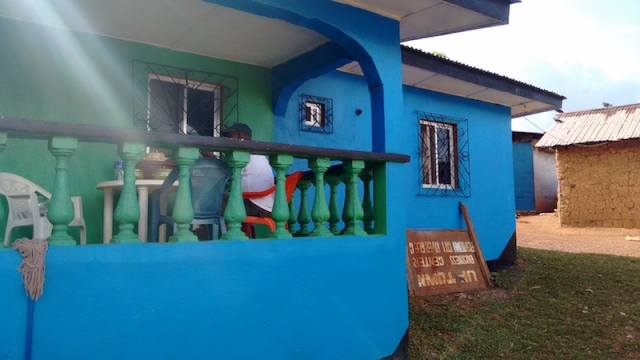 And I took a walk at dusk.

It was both peaceful and boring, like doing my laundry in Dakar.

The furthest south we went was Harper, Maryland County, which is close to the Côte d’Ivoire border. It’s a historic city and I saw a lot of grand buildings in decay…

…including the former home of President Tubman, now inhabited by regular townspeople.

There were also long stretches of beautiful, undeveloped coastline.

Here is a scenic view from the neighboring county of River Gee.

When we were back in Monrovia, my colleagues took me on two missions: one to find African wax fabric, which seemed slightly different than the styles in Senegal, and one to find bassa music, the traditional Liberian music we had been listening to in the car.

Here is the shop where I ended up buying fabric that I noticed is from the same place as some of the fabric I bought in Senegal: China. (I also bought some supposedly-Liberian masks for my brother-in-law only to have another vendor tell me they were actually from Ghana.)

And here is the stand where I bought my bassa mixes.

This guy was blasting a very loud hip hop set onto the sidewalk as advertising for his business, mixing and burning CDs. I told him I wanted both gospel and non-gospel bassa, as traditional and old-school as it gets, and he played me track after track from his song catalog. I gave each one a thumbs up or thumbs down and he added them to my CDs accordingly. I ended up with like 30 tracks for about $5. I will eventually post my favorite ones here..

And that’s about it for my pictures. Except for the food….

Liberia, even more so than Senegal, seems to be a meat and starch-based diet. The main meat is goat, and one of the main starches is cassava, which is the base for these big dumplings they eat with their meals.

Fufu (above) is the fermented kind and GB (below) is unfermented.

The Senegalese – lovers of a super-spicy pimento that once literally knocked the wind out of me when I got too close to a sliced raw one – are put to shame by Liberians, who smoosh theirs up into a paste and add it to their sauces/soups.

I tried the tiniest bit and it made my eyes water and throat burn. 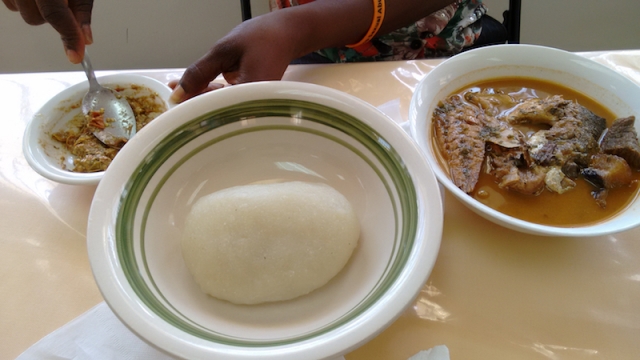 I can’t say I was the biggest fan of Liberian food, but I will instead repeat what I already said before: Liberia is a fascinating country, and I am so thankful to have experienced a small piece of it.