A small sampling of signs I have been amused by lately:

It took me six months to notice the one above, across the street from my house, but now I can’t stop seeing “beware of horse-drawn cart” signs everywhere. Which makes sense, since horse-drawn carts are ubiquitous in Dakar, including on all the main roads. As well as in front of my house: 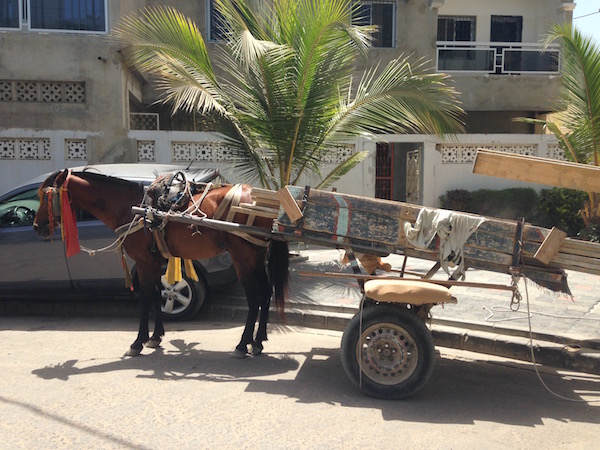 Not only do I love seeing the horses and whatever they’re carrying, but I also love hearing their peaceful hoof sounds. It’s like a little bit of the country in the city. 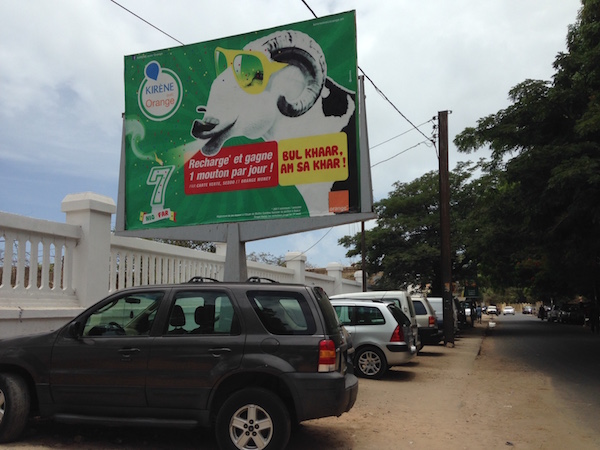 When I saw Orange (a French telecom company)’s sign, which says, “Recharge and win 1 sheep per day,” I thought perhaps “mouton” (sheep) in French was similar to “buck” (a kind of deer) in American English – i.e. a dollar (or in this case a CFA). But I wasn’t sure, because everyone seems to own a sheep or two around here and I had never heard of “mouton” being used as slang before. Then Tabaski aka Eid al-Adha came and went and the mystery was solved. Muslims slaughter sheep for the holiday meal and it had been a pre-Tabaski sheep giveaway… tied to recharging your cell phone. If that isn’t old world meets new world I don’t know what is.

This one just cracks me up. It translates literally to, “You do not have priority.” I suppose it is a “yield” sign, although before this I had only ever seen ones that firmly but politely say, “Cédez le passage.” This one had so much extra attitude that I found myself personifying it sort of like this:

And with that, enjoy your weekends and rest assured that you DO have priority, so go out and do something nice for yourself.