After a strong start in Montpellier, my whistle-stop tour of the South of France continued in Arles, a town that interested me because it was once home to Van Gogh, my favorite painter. I wanted to see the place that had inspired him to create some of his most beautiful work. 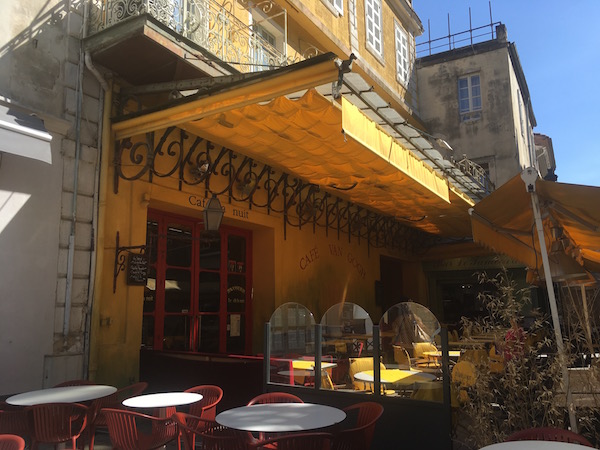 So naturally my first stop was the cafe that makes an appearance in this painting: 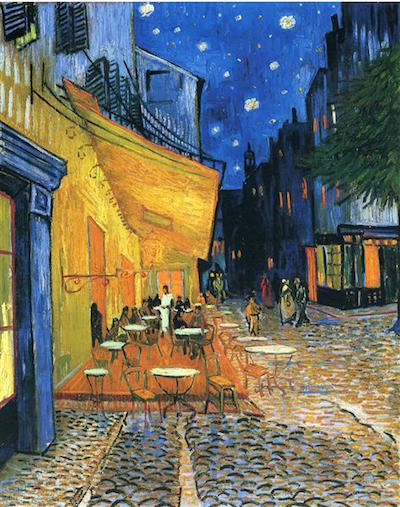 In the same picturesque square, I reunited with a friend – a Marseillais who I first met in Benin almost one year before when we were both on shoots – for ice cream. The artisanal shop had rose, and violet, and thyme, and ginger, and yuzu, and every other fantasy flavor imaginable. I spent ten minutes deliberating, and then chose my all-time favorite, rose, as well as thyme, because I am probably never going to have another chance to try thyme-flavored ice cream. They were both delicious.

Then we headed to the Vincent Van Gogh Foundation, where they had a small room of Van Goghs along with a bigger, more modern exhibition. 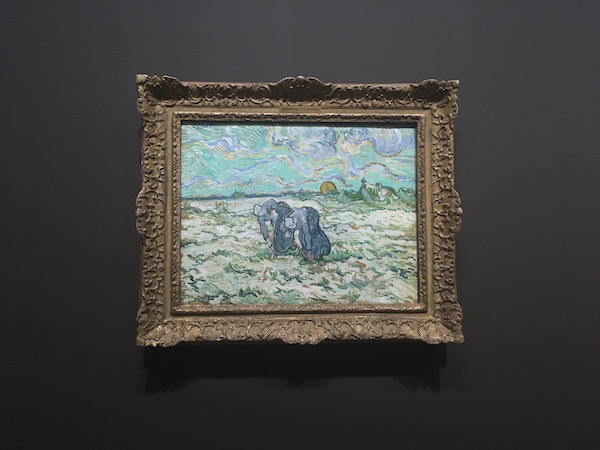 And then we tried to see a little of the Rencontres de la Photographie, an acclaimed annual photo festival that lasts three months. Unfortunately, both of the expositions that had been recommended to me were already closed for the season, as a lot of it shuts down in September.

But, we did see a cool show in a cloister whose construction began in the mid 1100’s. The photos were of Lenin statues that had been dismantled and discarded years ago, only to be re-placed, recuperated and/or redesigned by regular Ukrainians, who the photographers interviewed about their motives. 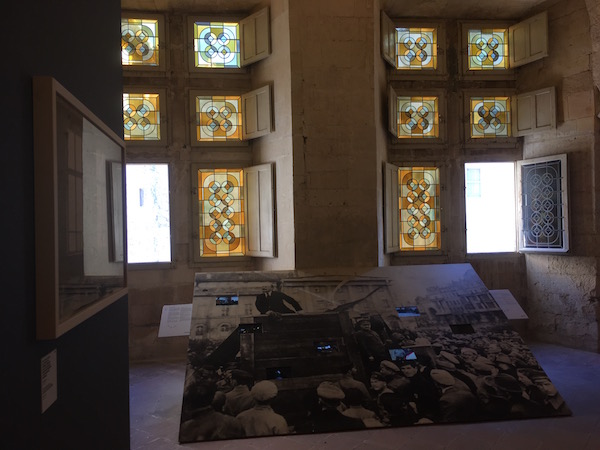 Then we wandered around the town, trying to find the hospital where Van Gogh recovered after cutting off part of his ear, and I was reliably wowed by the signage and the buildings along the way. (We did eventually find the hospital but it wasn’t much to look at.) 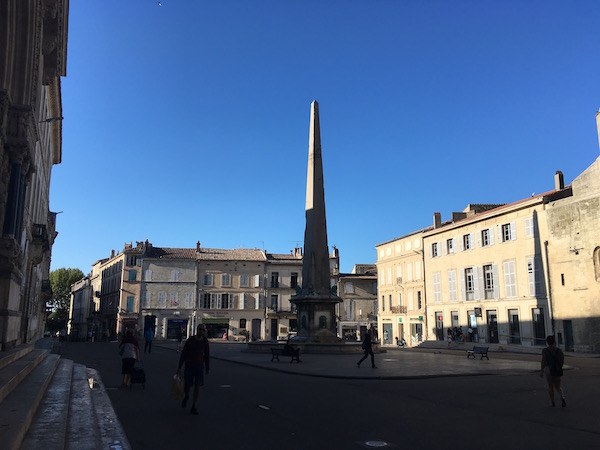 We kept wandering and passed by the ancient Roman theatre… 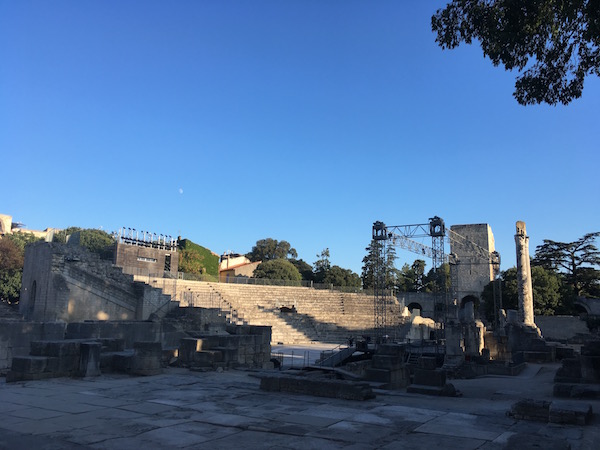 …and the ancient Roman amphitheater, both from the 1st century B.C.

Here it is again at night, a thing to behold, especially in the stillness and quiet of early September after the tourists have left. 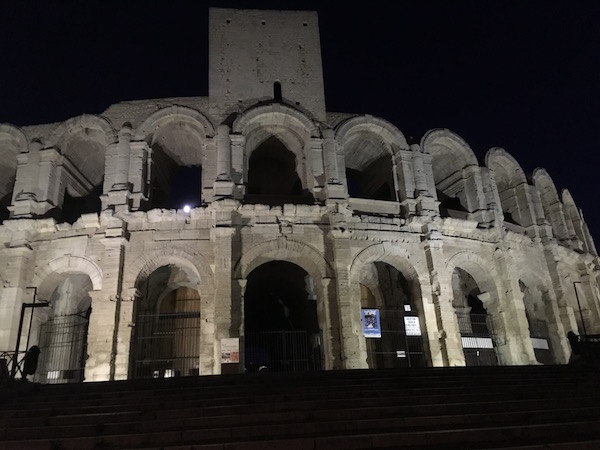 We walked around the amphitheater, taking it in from all sides, and it was in doing so that I happened upon a scene I recalled from a photo that I once found on Flickr and stuck on a blog post because it was so beautiful. (Indeed, it was much more beautiful in the Flickr photo, for reasons you will find obvious.) 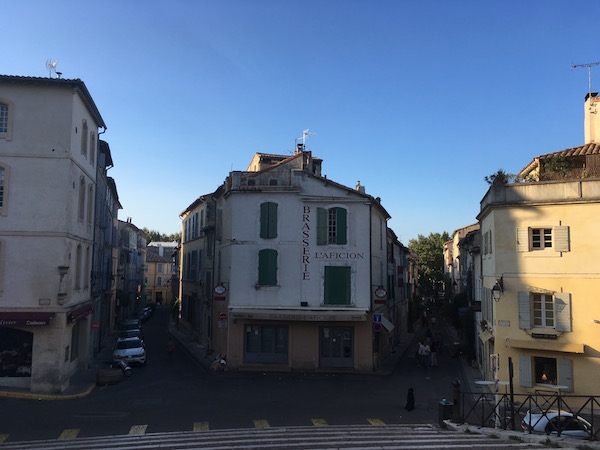 It was dusk when I dropped Gilles off at the station, and on the way back to town I found a sign that indicated where Van Gogh’s yellow house used to be. (This is where he painted “Bedroom in Arles.”)

The building stood where the apartment building on the corner now is. I communed with the spirit of Vincent for a few minutes, felt the first whiffs of well-being I mentioned a few days ago, and then walked leisurely back to my cozy cavern-like AirBnB.

On the way to the train station the next morning, I stopped at this spot again and a tour guide who was there told me that the building, along with a cafe across the street that Van Gogh had frequented, had been destroyed by bombing during World War Two. The only thing that remains from Van Gogh’s painting is the little bridge in the background, which I then felt compelled to walk up to, stare at, and think, “Van Gogh looked at this bridge from the same angle that I am now, he walked this same path, and he made out of this un-extraordinary bridge a thing of beauty that brings joy to millions of people. And he died not knowing how much it meant.” I put my hand on the bridge and tried to imagine that he might have done the same thing a hundred thirty years ago. I was really in a Van Gogh-induced reverie… until I realized I was going to miss my train and had to speed-walk the rest of the way to the station.

And with that, I was off to Marseille.