In mid-September I spent three days in Madrid, but I had work meetings in an office outside the city center for two of those days, so I didn’t get much of a chance to sightsee. Still, I packed a lot of wandering into my one day off, and I got a much better sense of the city than I did the first time I came here in 2000. That was also a short visit, of two days I think, but I may as well not have gone because I spent the whole trip ensconced in personal drama, walking around in a daze and absorbing nothing of Madrid’s essence. 17 years later, I got a second chance to see what I had missed the first time around…

Upon arrival I headed straight for lunch. I happened to be staying ten minutes by foot from Platea, the one spot in Madrid that I had on my to-do list, after reading about it in The New York Times’ “52 Places to Go in 2017” feature. (Their “36 Hours In Madrid” piece came out a mere days after I left the city, ah well.) Platea is an Art Deco cinema turned food hall. I bee-lined for the counter selling jamón iberico and manchego, one of the world’s best food pairings.

Those cones above are each filled with like three servings of ham but I ate it all, and then I drank two bottles of water because I felt like I had been salted from the inside. (I don’t regret a thing.) 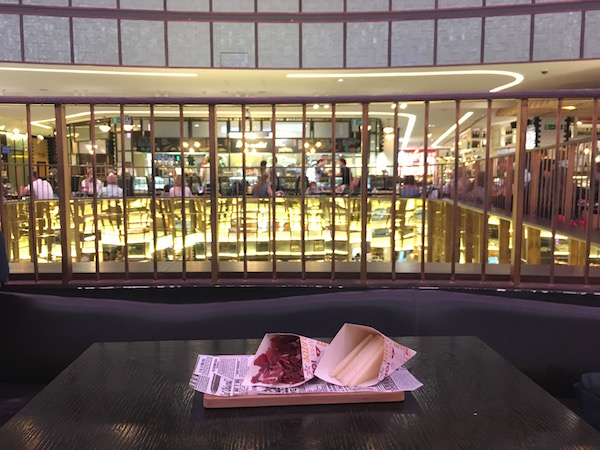 Then I wandered through town taking as many scenic routes as possible. I strolled through the big central park, Parque de el Retiro, where it seemed like the entire city was spending their Sunday.

I walked through Plaza Mayor…

….by way of a street fair in which a middle-aged band called EiSi DiSi was playing what I imagine must have been AC/DC covers in Spanish, as the crowd stood in the remnants of foam that I first mistook for snow (with much confusion). It felt both bizarre and appropriate.

If you know me you know I love beautiful and/or cool buildings, and I passed plenty of them during my wanderings. Here are three – in very different styles – that I especially liked: 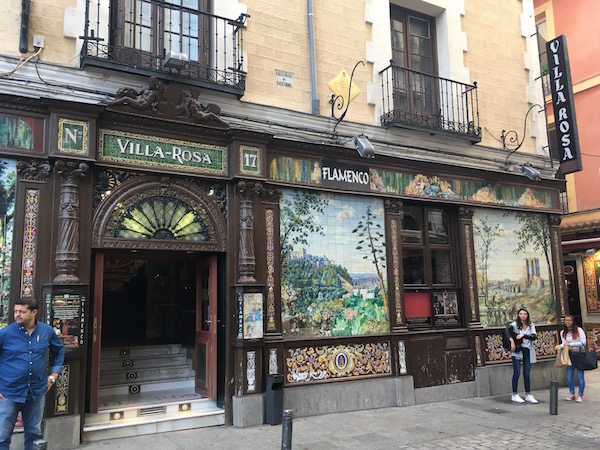 Then I met up with my colleague and we went to dinner at an old-school Galician seafood place, La Casa Gallega, that has been around since 1915. I recommend it for the ambiance alone, though the food was good, too.

On the way back to our hotel we passed by this craziness:

There must have been upwards of 500 hams hanging from the ceiling and walls. I posted a photo of the place on Instagram and my friend told me that it was the famous Museo del Jamón i.e. Museum of Ham. She pointed out that there is also a Palace of Cheese in town, and I tried desperately to find time for a visit to what sounded like heaven on earth, but alas, there was no extra time to be had. And also I wasn’t quite sure where she was referring to. Perhaps this place called Poncelet?

Despite missing out on the cheese palace, I ate really well in Madrid, between cured ham and manchego, seafood, about a dozen kinds of tapas, and even some sushi thrown in for good measure. 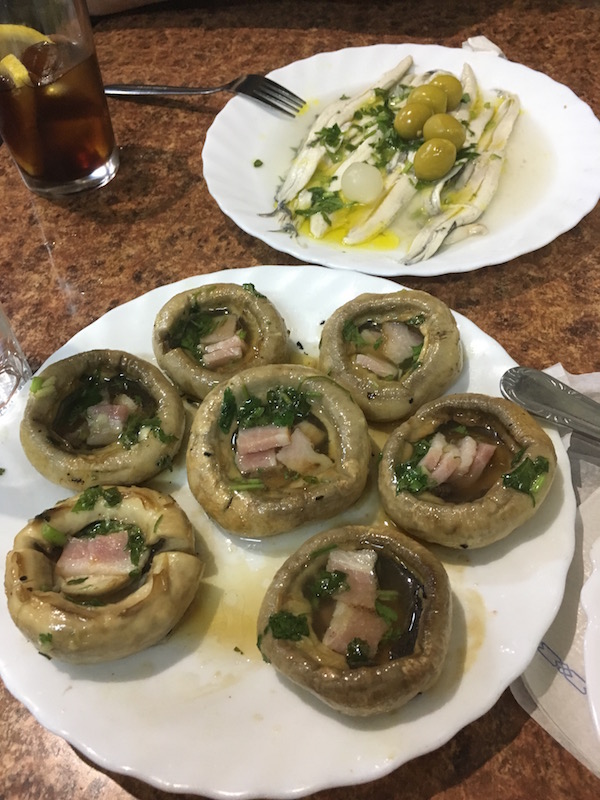 So yes, I think I amply made up for my lost weekend in Madrid nearly two decades ago.

Instead of going straight back to Paris, I tacked a few extra days onto my trip and headed south, to see a friend / ex-colleague who just retired to the Atlantic Coast of Spain and to visit close-by Seville, where I had never been. Pix soon…