It makes sense that the first (and let’s be honest, probably the last) poem I ever wrote in French was inspired by drinking Sancerre in Sancerre:

(I’ll leave the translation to you.)

My first taste of Sancerre was during the spring semester of my senior year at college.

I went for drinks with other soon-to-be-graduating friends at a French-style bistro just off campus. We sat around a small outdoor table in the fresh April air of a faux Parisian terrace, eked out of a Manhattan sidewalk. I had only recently crossed over the divide into legal drinking, and the freedom of choice was thrilling. When a friend of a friend who seemed to come from a glitzy background suggested we order a bottle of Sancerre – her absolute favorite, she said – I was incredulous she could remember the name of a wine, annoyed that a 21 year-old claimed to have a specific wine preference, and even more annoyed that it just happened to be the most expensive one on the menu. We were college students, not college professors.

Still, when the bottle of almost-white rosé arrived and I took my first sip, I had to admit there was something special about this wine. It was crisp and refreshing, with a hint of sparkling grapefruit, and for the first time, I truly enjoyed drinking a glass of wine. I am not sure whether it actually tasted sophisticated or whether I simply read sophistication into the experience, but from that moment on I linked Sancerre with both exceptional taste and understated elegance. In the more than 15 years since that spring evening, it’s the only wine whose taste my ridiculously forgetful palate can identity, the only one I get excited to see on a wine list, and the only one I’ve ever splashed out for at a wine shop.

So, when I realized that the town of Sancerre was less than three hours from Paris, an idea inevitably took shape. How amazing would it be, I daydreamed, to drink a glass of Sancerre in Sancerre? 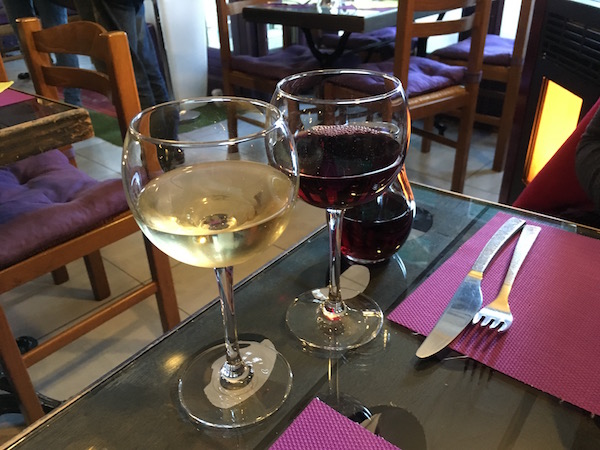 The answer is: incredibly amazing, especially if it’s a perfectly bright and crisp autumn day, your friend Simona is in town, and your only ambition is to wander around the countryside sipping wine and eating cheese.

Some more pictures, after the jump…

Early in the morning, we took a train from Paris to a dinky little town two hours south, where we switched to a shuttle bus that dropped us off near this overlook in Sancerre itself. Not a bad start to the day.

We were hungry and went looking for lunch and our first taste of Sancerre. The fancy Michelin-starred restaurant with a somewhat affordable prix fixe lunch was closed, because Mondays in non-Paris France are often just as frustrating as Sundays that way. We managed to find one open restaurant that seemed appropriate for drinking Sancerre.

And I went all-in on the classic French gastronomy, ordering wine-soaked magret de canard along with my glass of white Sancerre. Fun fact for people who are as wine-ignorant as I am: Sancerre can be a red wine (as in the glass above) as well as a white. Most sancerre is made from sauvignon blanc grapes, which are green, but a minority of the wine produced in Sancerre is made from pinot noir grapes. (Unlike in the States, wines in France are named for their region as opposed to their grape.)

After lunch we explored the town by following this cute little red dashed line painted on the roads, marking out a trail from landmark to landmark. (You can see it faintly on the right side of the street in the image below.) 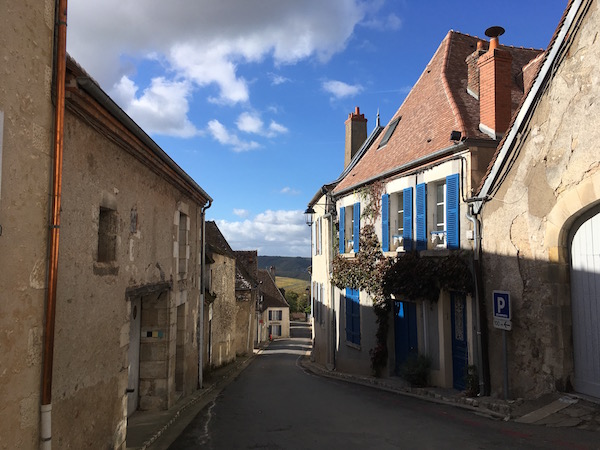 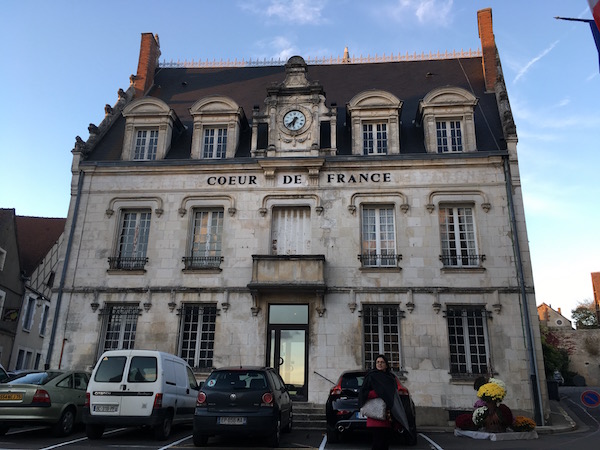 It’s a 45-minute walk from Sancerre to Chavignol, an even tinier, even cuter town whose claim to fame is crottins de Chavignol, i.e. mini goat cheese wheels. We walked through vineyard after vineyard along the route between the two towns, stopping to sample grapes that were left on the vine after the main harvest, which was just a few weeks before. 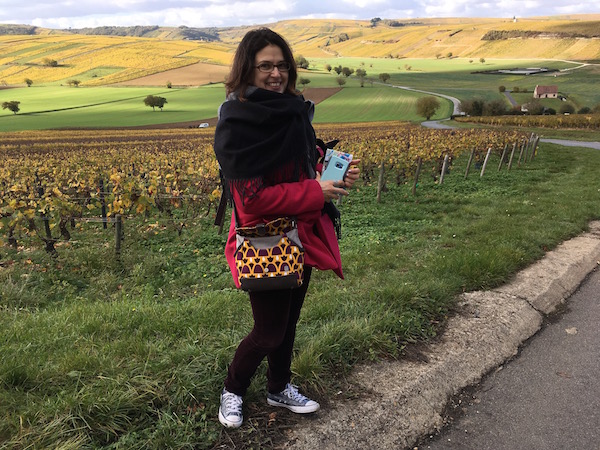 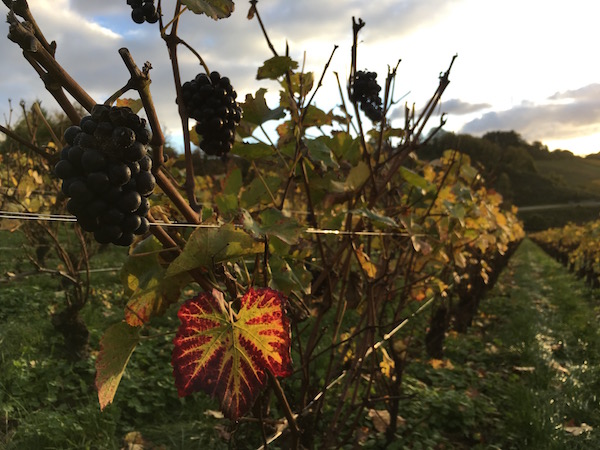 Once in Chavignol, we continued to sip wine – both Sancerre and Pouilly-Fumé from the next wine region over. I don’t think I had ever tasted the latter before. It is quite possibly just as delightful as Sancerre.

Then we went in search of the famous crottins, and found them at this place.

It was delicious. (Don’t ask about the dog. It’s Simona’s thing…) 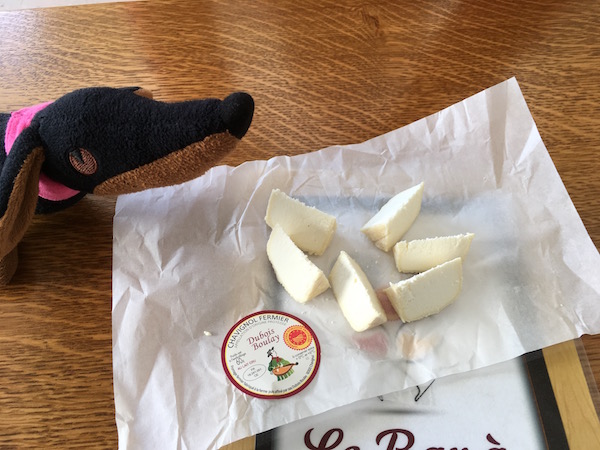 We headed slowly back towards Sancerre, stopping every once in a while for clandestine grape plucking.

There were still some people working the fields, and we noticed this very interesting vehicle that has a grape-vine shaped hole in the bottom, so that it can drive directly overtop of the vines without smooshing them. (We guessed that it removes the grapes from the vines but since there were not many grapes left we could not be sure.)

There’s Sancerre in the distance, looking oh so regal and just very French.

Towards the late afternoon the sky got moody and the light was incredible. 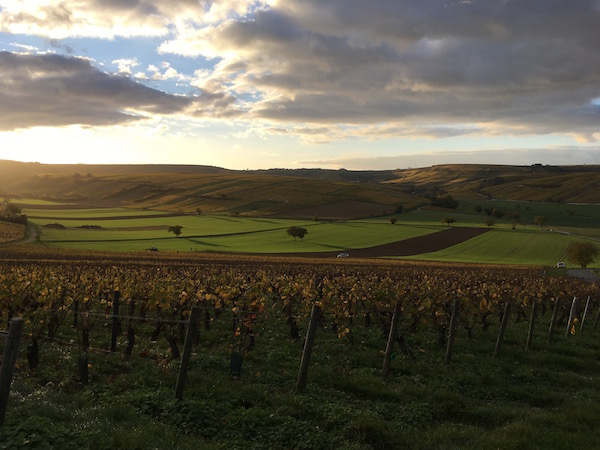 And once back in town, we passed by two guys pumping wine into barrels. I believe, based on my faltering conversation with them and on what I already know about wine-making (which is more than I know about wine-drinking, ironically) that this may (or may not) have been “free run wine.” 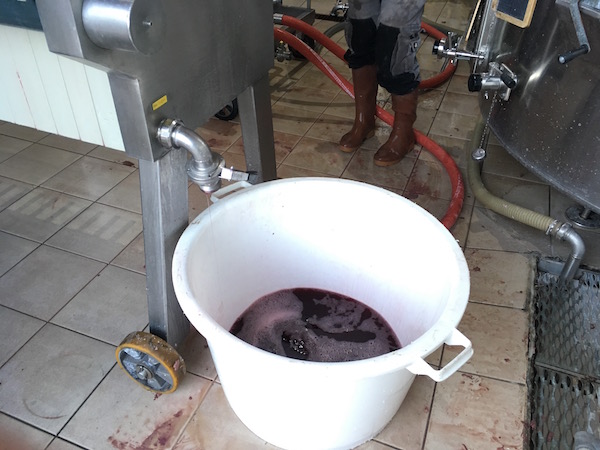 I found it thrilling to be so close to the action, even if I was not entirely sure what the action was.

Whether it’s beautiful scenery, delicious wine, delightful cheese, or adorable French towns you’re after, I would highly recommend Sancerre. It’s a town worth toasting to, and definitely worth toasting in.

3 thoughts on “Drinking Sancerre in Sancerre”