When I arrived in Paris in mid-April two years ago, I assumed I was in for a lovely spring in the City of Light, followed by a graceful transition into a pleasantly mild summer. I had left both my early winter and deep winter coats behind in New York and packed only a leather jacket, a light puffer jacket, and a wool sweater to keep me warm. I figured that would be enough. I was wrong.

I spent the first two weeks of my time in Paris waking myself up with my own shivering, running to the space heater to turn it on, diving back under the covers with my sweater on over my pajamas, and curling up in a fetal position until I summoned the courage to get out of bed a half hour later. Leaving the house wearing my sweater, puffer jacket, and leather jacket one on top of the other made me look like an Oompa Loompa and yet did not keep me warm enough, even in the sun, which rarely made an appearance.

Most days, the default Paris setting was gray skies, punctuated by maybe an hour or two of sunshine at some point in the morning or afternoon. I started thinking of the sun maliciously, like it was a stuck-up tease.

When summer came, not much changed apart from a slight increase in the temperature and a toning down of the sky’s tint from gray to milky beige. The sunny days lasted longer but they were still too few and far between. Everything just felt… bof.

I realized then that Paris has somehow avoided the reputation that London has for cold, rain, and gray, but it nevertheless follows the same general weather patterns. And I am not a fan of those weather patterns in the least.

Though the scientific data does not in the least back me up, I remain certain that there are far more clear blue skies from September to December than there are during the spring. And even when it is objectively cold and gray, Paris paradoxically wears its shitty weather so much better in fall and winter. It’s not a popularly held belief, but I truly believe that the off seasons are the best seasons.

Here are five reasons why I take this controversial stand:

No disappointed hopes – the weather aligns with expectations.

First and foremost, I am mentally prepared for crummy weather during fall and winter. Bone chilling cold in May and gray drizzly skies in July are both super depressing, but in autumn and winter they’re somewhat romantic – an invitation to get cozy.

The city’s colors are more beautiful.

The ubiquitous Lutetian limestone buildings of Paris work way better with winter light. The color palette is all muted neutrals – gray, linen, blush, and the palest blue. That’s probably why Pissarro’s “Boulevard Montmartre on a Winter’s Morning” (which you can see in person at the Met!) is one of my favorite paintings:

In fall, meanwhile, the contrast of gold and burgundy leaves against ornate white buildings is gorgeous. Plus there is a golden tinge to the light that makes everything look candle-lit and shimmery.

One of the eeriest experiences I’ve had was spending the month of August in Paris. My neighborhood of Belleville emptied out of half of its inhabitants, and the vast majority of stores were closed for almost the entire month. I felt like I was one of the only survivors of a nuclear apocalypse. In retrospect, that summer was the most depressed and anxious period of my adult life, for unrelated reasons – but I am sure that living in a city abandoned by most of its inhabitants did not do my mental health any favors.

Meanwhile, every time I would venture into the center of the city, it was overrun by tourists. Why anyone would prefer to visit Paris at a time when Parisians opt to leave it behind is beyond me. It’s like hanging out in Times Square for a week and thinking you’ve visited New York.

Also, if you’re a fan of shopping… the famous Paris sales that happen twice per year – in January and in late June and July – are a million times more enjoyable in January. Everything is less picked over and frequenting les soldes feels less like a harrowing free-for-all and more like a soothing winter afternoon’s jaunt.

Christmas-time in certain European cities is magical. Paris is one of those cities. I wrote about it here and here. 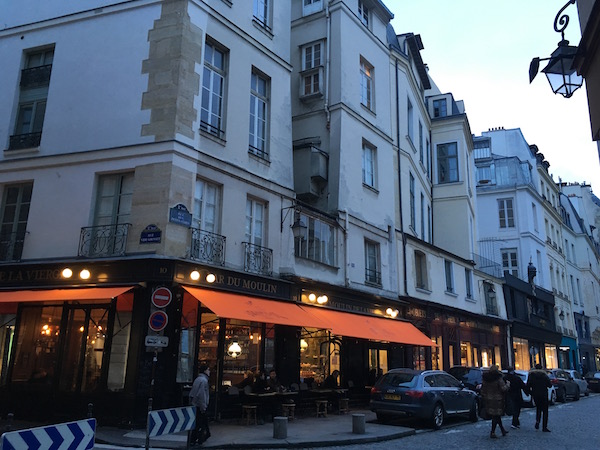 Lingering at a bistro counter with an espresso and a good book can become a full-day activity.

In Paris during the warmer months (using the term loosely), you feel pressure to get outside even when the weather is not that great, because you never know if that’s the best you’re going to get for awhile. The second the mercury rises above 60 degrees, people overrun the banks of the rivers and canals with their adorable picnics of wine and cheese. I find it sort of pitiful: these poor urban creatures of the North, basking in barely passable living conditions.

I’d much rather start the day knowing it’s not going to turn around for a brief moment at 2pm and then I’ll have to drop everything and run to the nearest patch of sun to soak it in like a desperate Vitamin D-deprived wretch, only to run home again when it turns overcast and chilly ten minutes later. I’d much rather dress as though I am going on a ski trip, head down the street to my corner cafe, and hole up there with a shot of caffeine, a good book, and a rotating cast of local characters to pull me out of my reverie every once in awhile.

And when the endless stream of dark and gray days finally gets to be too much, I can always take the fast train south, for a dose of sun from one of those Mediterranean cities that actually knows how to deliver it.