Mombasa is a fascinating Swahili city, which, like Zanzibar’s beautiful Stone Town, was influenced by a variety of different cultures, religions, and societies, due to its situation as a trade center on the coast of the Indian Ocean. I had about four hours to explore before heading to the airport to return to Nairobi from my field trip, and I saw a surprisingly large amount of Old Town (and some bits of the newer city as well) in that time.

According to Encyclopaedia Brittanica (gotta bring out the big guns to properly explain this complicated history):

Before Mombasa became well established as an important port for trade across the Indian Ocean, the general area had long been the site of settlements inhabited by Bantu-speaking peoples who engaged in farming, fishing, and local trading. It was visited in 1331 by the Arab traveler Ibn Baṭṭūṭah and in 1498 by the Portuguese navigator Vasco da Gama. Because of its strategic position, it was continually fought over, passing among the Arabs, Persians, Portuguese, and Turks until 1840, when the sultan of Zanzibar finally gained control. It came under British administration in 1895 and was the capital of the East Africa Protectorate until 1907. Mombasa became a municipality in 1928 and assumed council status in 1959.

Suffice it to say that it feels like a cultural crossroads in Mombasa. 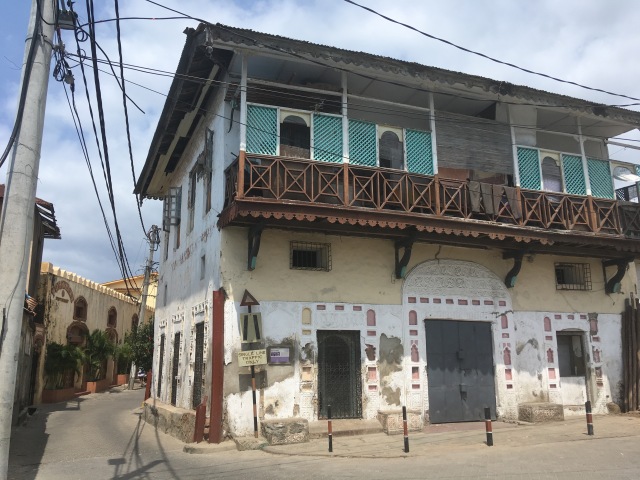 First stop was a seaside restaurant in Old Town, Forodhani, where I ordered appropriately fusion fare (a very tasty Swahili-infused curry) and stared out at the view.

Then we walked through the narrow streets of Old Town, passing the city’s oldest mosque, the Mandhry Mosque, built in around 1570.

We saw buildings in various stages of upkeep and disrepair. I really would have loved to visit the curio market below, but it was closed – who knows if only for the day, or for months, or for years.

We passed by and decided to stop in to Jahazi Coffee House, where all profits go back into programs to empower youth in the Old Town community.

Then I zipped through Fort Jesus while my colleague ran an errand (he had already visited). The fort was built by the Portuguese between 1593 and 1596, and according to UNESCO (again, bringing out the big guns):

Fort Jesus, Mombasa, bears testimony to the first successful attempt by Western civilization to rule the Indian ocean trade routes, which, until then had remained under Eastern influence. The design of the fort, with its proportions, its imposing walls and five bastions, reflects the military architectural theory of the Renaissance. Fort Jesus, Mombasa, bears physical witness, in its structures and subsequent transformations, also to the interchange of cultural values and influences between and among peoples of African, Arab, Turkish, Persian and European origin that fought to gain and maintain their control over this strategic port.

And now, because UNESCO didn’t mention it, I bring out the much smaller and more unreliable guns to quote Wikipedia about the Omani siege of the fort, which I find fascinating (mainly due to my recent fascination with Oman in general):

Fort Jesus was captured and recaptured at least nine times between 1631, when the Portuguese lost it to the Sultan Yusuf ibn al-Hasan of Mombasa, and 1895 when it fell under British rule and was converted into a prison. After the Portuguese recaptured it from the Sultan in 1632, they refurbished it and built more fortifications, subsequently making it harder for the fort to fall. The fort was subject to an epic two-year siege from 1696-98 by the Omani Arabs, led by Saif bin Sultan. The capture of the fort marked the end of Portuguese presence on the coast, although they briefly captured and re-occupied it between 1728 and 1729 with the help of the Swahili city-states. The fort fell under local rule from 1741 to 1837, when it was again captured by the Omanis and used as a barracks, before its occupation by the British in 1895, after the declaration of the Protectorate of Kenya.

I was almost out of time, but I had heard that the oldest remaining residential houses in Mombasa were a few blocks from the fort, and I went on a wild — and unsuccessful — goose chase to find them. What I found instead was better. Next to where the houses were supposed to be, at a spot where Google Maps has a marker for a “tea shop,” I found this makeshift cafe where locals seem to gather in the evenings. If that guy in gray hadn’t been giving me (or perhaps my camera) the stink eye, and if I had not been running late to meet up with my colleague, I would have stopped for a glass of tea and what I’m sure would have been my most memorable moment in Mombasa. Pardon the over-alliteration.

As it was, I booked it back to the taxi and we drove through the grid-locked new city to pick up my colleague. In the new city, most of the buildings are white and blue. My colleague told me it’s a fairly recent law to beautify the city, but he’s no Encyclopaedia Britannica so don’t quote him on it.

I had wanted to stop in the famous spice market below, but there wasn’t enough time. There was so much gridlock that I probably could have jumped out, taken a peek, and hopped back in the taxi before it moved an inch, but the driver seemed highly anxious when I suggested this, so I took a picture from inside the car instead.

Finally, apparently these horns (that I only just now realized are actually tusks) are famous.

Boom! I’m now more than halfway through my Kenya posts. That’s what happens when you’re living in a hotel in northern Cote d’Ivoire with no social agenda for two weeks. Next up, beautiful Karen…

One thought on “Kenya: Mombasa”