When I tacked a week of vacation onto the end of my work trip in Kenya, I didn’t realize that it would be impossible to decide what to fit into that one week. In the end, rather than cut anything I deemed essential out, I squooshed everything I wanted to do into the time available. And so, I made a recklessly overambitious plan to fit Hell’s Gate and Lake Naivasha into barely two days when I should have given them four. No regrets – it was the most amazing, stunning, wonderful two days.

A colleague of a colleague of a colleague connected me to a driver who took me to Olerai House on Lake Naivasha by way of Hell’s Gate, where I spent a few hours biking and hiking. The next day, I was supposed to return to Nairobi by way of Lake Naivasha’s Crescent Island, where you can do a walking safari, but I nixed that plan in order to spend more time enjoying Olerai, which sits right on the lake and where you can also walk amongst animals, but with less displacement and added expense.

Before Hell’s Gate, the first stop was this overlook onto the Great Rift Valley.

Then we continued on to Hell’s Gate, a national park where you can bike through a valley studded with rocks and zebras (!) to a canyon that carves its way through the rocks.

It didn’t occur to me that the hike through the canyon would require shoes with good traction, so I wore my Supergas. Big mistake. I was slip sliding all over the very smooth and sometimes wet rocks instead of scrambling over them as required. 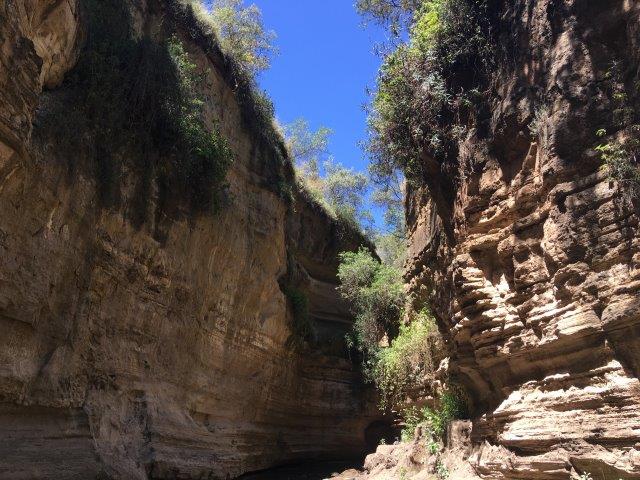 I also didn’t realize I would have to climb a rope up a cliff about ten or fifteen feet in order to complete the circuit. I needed a strong butt shove to make it up to the ledge.

Once back on top of the canyon, the views were incredible.

From Hell’s Gate, we drove on to Olerai House, a wonderland that I discovered on Instagram. It was a hefty splurge (even with the very generous discount the owner kindly extended to me).  I felt uneasy about the expense — until I stepped foot on the grounds. Then I realized this was a once-in-a-lifetime opportunity and my time should be spent enjoying it rather than giving myself a guilt-trip.

This was my little cottage:

And the path leading from it to the rest of the grounds:

I got there in time for a late lunch, which was served on the grass, with a view all the way down to the lake. The whole property is studded with animals that have been reintroduced from the general vicinity.

Below, my lunch table and view. STUNNING. I felt a sense of Buddha-like peace and contentment.

And then lunch was served. I went bonkers with delight. First of all, they baked me gluten free bread that was the best I’ve ever had. 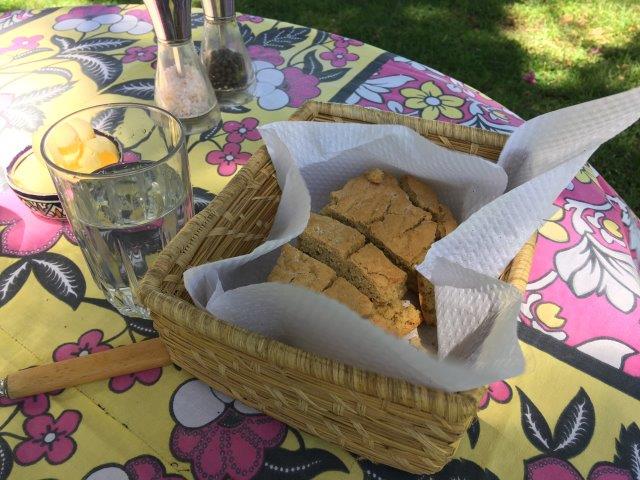 They served it with this deliciousness.

I ate it all, felt wonderfully full, and then was served my actual lunch. Apparently that had only been the starter. Here’s my gluten free pasta and various other accoutrements.

The concept of gluten intolerance seems to be very little known in Kenya, but not at Olerai House. Here they made me gluten free bread, and pancakes, and muffins (and three-course breakfasts, lunches, and dinners). I told the person who served me the food that they were spoiling me, and then I realized I should actually say they were pampering me. Living well is not the same thing as being spoiled (though of course the two do often overlap). I don’t know where the line between using your disposable income to treat yourself and using it to be charitable to those who are less fortunate should be drawn, but I decided that I could budge the line a bit further in my direction, just this once.

Then the zebras showed up.

They just wandered casually onto the lawn in front of me. It felt like something out of Fantasia. As I ate my lunch, they grazed their grass. I’m telling you, it felt like my life was complete and if I died here, I’d die happy. After that, I was convinced that, as in the Mastercard commercials of my youth, this wonder could not be appraised in dollars — it was priceless.

Over the following 27-ish hours, I took several walks around the grounds with a guide who made sure I didn’t get too close to the buffalo…

…or fall into the lake where hidden hippos were snorting.

Both afternoons, I spent time by the pool, which was surrounded by a troop of playful baboons. 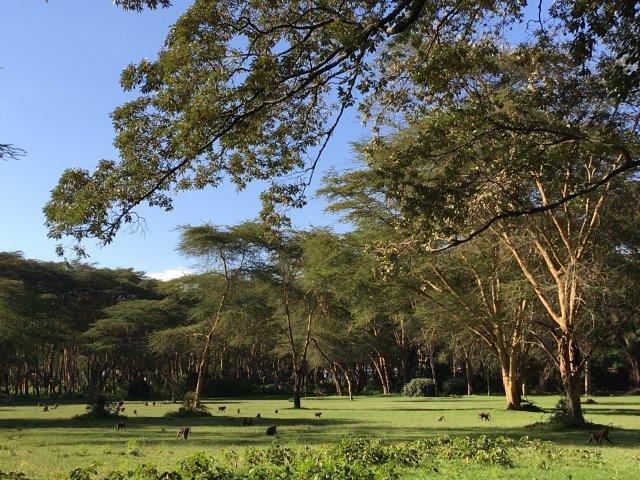 One even ventured over to share the terrace with me.

On one of our walks, we were surrounded by three different families of zebras, practically within spitting distance.

At one point I got a little too close… 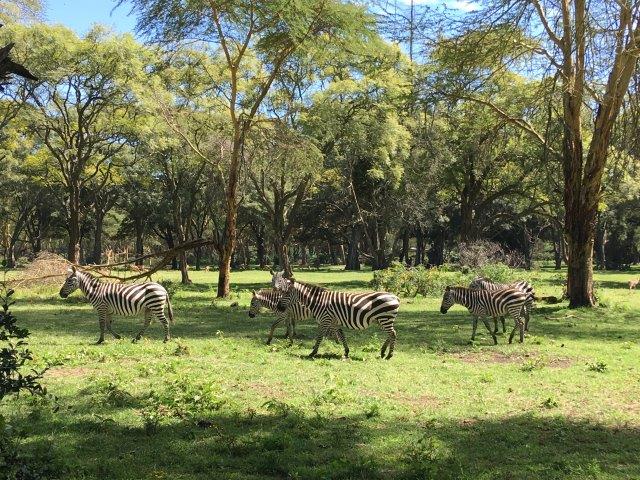 …and they all ran away at once. Breathtaking. 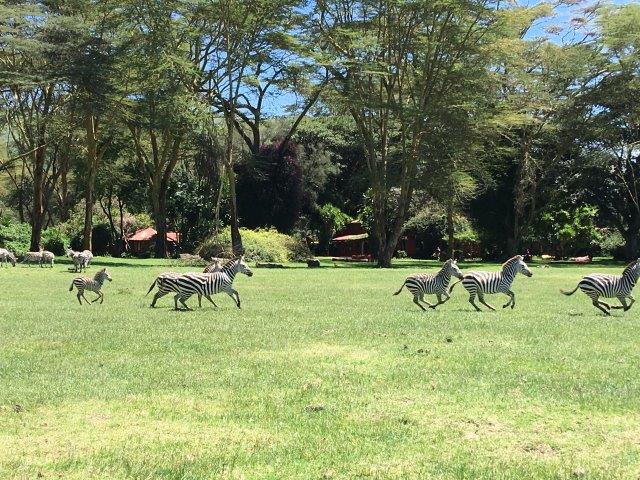 When the driver picked me up to take me back to Nairobi, I dragged my heels like a child who didn’t want to go to bed. I left with extreme reluctance, vowing to come back one day in the not too distant future. In the meantime, Olerai was and probably will remain among the most enchanted 24 hours of my life. 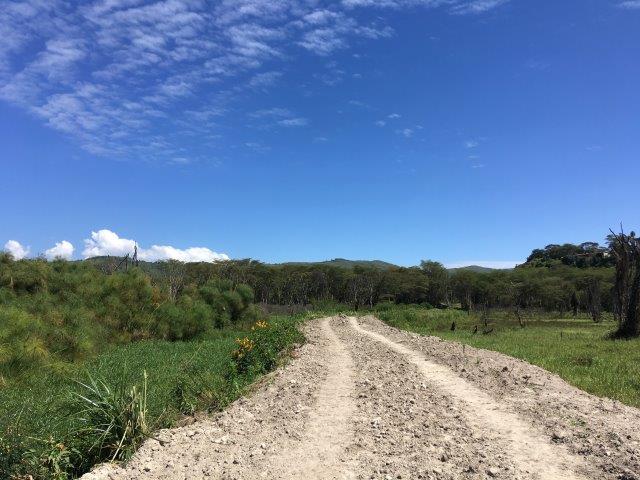 Next (and last) up in my Kenya adventures, a safari in the Masai Mara.