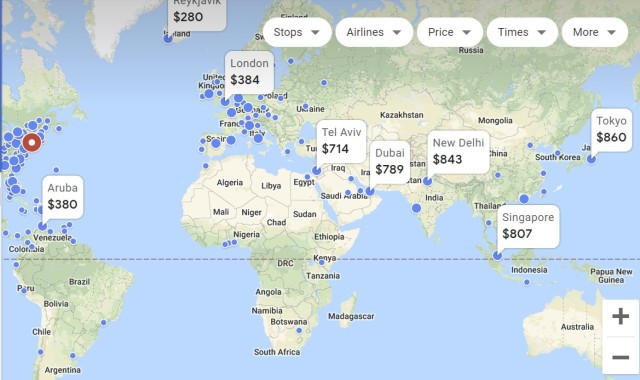 Are you ready for my second awesome flight search discovery in two weeks? It’s another one that is gobsmackingly useful, and so obvious that in retrospect I feel a little dumb for not having thought of it sooner: there is a way to search for flights with only a departure location and travel dates.

Both Google Flights and Skyscanner allow you to opt out of providing an arrival city (for Google Flights you leave that field blank; for Skyscanner you type in “Everywhere”). You can then filter the flight results by price and choose your destination based on what you can afford.

I happened upon this travel hack last week after I decided to plan a girls’ getaway for my birthday in October. My high school friends had all intended to whisk us away to exotic locales for their big 4-0’s but never ended up following through. As the youngest, I’m the only one still staring down 40, and therefore the last best hope that we will go on a group trip before we all turn 50. So, after my college friend mentioned that she is planning a trip to Eastern Europe for her own birthday this spring, I started toying with the idea of turning my fantasy of a Martinique-Guadeloupe solo trip into a shorter 4-day birthday weekend with friends. Having heard that Norwegian Air now flies to Martinique for under $250 roundtrip, I figured it would be both a fun and affordable destination.

Then I searched for flights and saw that Norwegian Air doesn’t go to Martinique or Guadalupe in October, and the cheapest alternative flight at that time is something like $950. But now that I had gotten the idea of a birthday getaway into my head, I asked myself, “Where else could we go for $250?” A short Google search later, I found the Google Flights and Skyscanner tools and discovered that:

• for under $300 roundtrip, we could fly nonstop to Iceland – where I’ve never been and where the Ring Road is a highly scenic option for a 3-day excursion.
• for under $400 we could fly direct to Ireland – where I spent four months of my 20th year studying abroad, and where it would be lovely to return exactly half a lifetime later.
• for about $410, we could fly to Barcelona and drive from there to either Andorra or the French Pyrenees to hang out in beautiful house nestled in jaw-dropping mountains for a few days.

Those are three pretty awesome options. So, thank you to Google Flights and Skyscanner for helping me to get the 40th birthday festivities train rolling. (Why do I keep using non-aerial travel metaphors when I have every intention of flying??)

P.S. An addendum to my last post: Less than 24 hours after writing about how the Dakar of 2019 remains largely unchanged from the Dakar of 2016, I attempted to check the schedule for my favorite live music venue in the city, Just4U – and found it was closed for good!

Waaaaaaahhhhh. A TRAGIC LOSS. Clearly I should have waited more than a couple of weeks before making any grand claims about this city…