It’s not that my disdain for Nescafé comes from being a coffee snob. It’s more that it just doesn’t work. As I’ve noted before, I’m super sensitive to caffeine, but I can drink seven cups of Nescafé and still feel no more awake than the second after my alarm clock goes off.

But there are really no other coffee options here, apart from a drink called Café Touba, which is sold in mini plastic cups at all the road-side kiosks (like the ones in the photo above). The coffee is ground with peppery spices and mixed with lots of sugar. I tried it. It tasted okay – though it smelled uncomfortably like Robotussin – but it had absolutely no effect on my level of alertness.

On my first Saturday here, during my stroll along the Corniche, I stopped in at a fancy hotel to see if they might have honest-to-goodness coffee. My desperation for caffeine was such that I was overjoyed to find them serving Nespresso. It tasted frothy and delicious, and more importantly, I spent the rest of the day properly wired for the first time in a week. 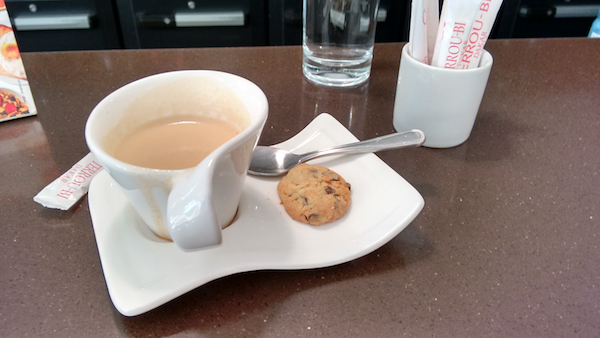 Since then I’ve found a pan-African / Caribbean restaurant a couple blocks from my house that also serves Nespresso, and I’ve been going every day for my daily fix. I thought the problem was solved… Until I went to the restaurant this morning only to find it closed on Saturdays until later in the evening. I am literally beside myself in my longing for a Nespresso right now. I know this is utterly ridiculous in quite a number of ways. And yet the fact remains that I about to lose it.