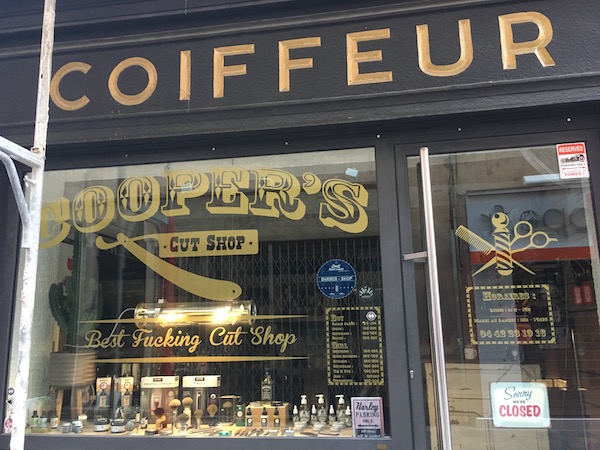 One thing I notice again and again about French texts, emails, and signs is how overly polite and flowery the language is. When reading them, I sometimes imagine the writer doffing his hat and bowing ceremoniously like the two little guys on the right. (Meanwhile, my attempts to replicate French politesse come out more like the one on the left.)

Here are some examples of what I’m talking about. I’ll follow each French phrase with the most literal English translation I can give while still making sense:

In a professional email:

In a doctor’s office waiting room:

I ask you to really want to turn off your cell phone.

[It took me ages to figure out bien vouloir, because it’s such a roundabout and redundant way to say if you please. You can take it out of any sentence it’s in and that sentence will still make sense; it’ll just be far less fancy.]

An email I received from a customer service agent after I ordered an iPhone from her, which I then picked up at an Apple store:

I permit myself to contact you to assure myself of the successful receipt of your order.

The response after I sent the customer service lady a one-line note to confirm that I had, in fact, received my order:

I thank you infinitely for your email.

After most first dates I’ve been on, within 1-24 hours of saying goodbye I receive some variation of:

Thank you for the very nice time spent in your company.

And instead of simply saying “bonne nuit,” some men text:

I wish you a good night.

The gentility of it alternately charms and annoys me. I am reminded of the episode of “Sex in the City” in which Carrie is dating a Russian played by Mikhail Baryshnikov, and he keeps surprising her with overly romantic gestures. Finally, she fakes a faint and begs him, “It’s too much. I’m an American. You gotta take it down a notch.”

What’s surprising is that for all the poetic politeness of French people when speaking in their own language, they think nothing of using the most dirty English. Case in point, the barber shop pictured at the top of this post. I passed it on a beautiful street in Aix-en-Provence, a town at the height of French loveliness and respectability.

This was not a one-off. I see English curses used in French signage right and left in Paris. And last month, my mouth dropped open when I scrolled past an Instagram post by a very chic Parisian hotel called C.O.Q. Hotel, whose logo is a rooster, i.e. a coq. The post said, “Le Coq Hotel offre une bouteille de vin BIG COQ au 6000e follower Instagram.” “The Coq Hotel offers a bottle of BIG COQ wine to the 6,000th follower on Instagram.” I googled: the wine does exist, and it’s clearly tongue in cheek, but… It’s still too much.

I live in a glass house of French faux pas, so I will be the last to throw stones. But I would thank the French infinitely if they’d bien vouloir confirm that their English is appropriate / non-ridiculous before making it part of their public marketing. Until then all I can do is shake my head and laugh a little.

2 thoughts on “chivalry is dead (but not in French)”