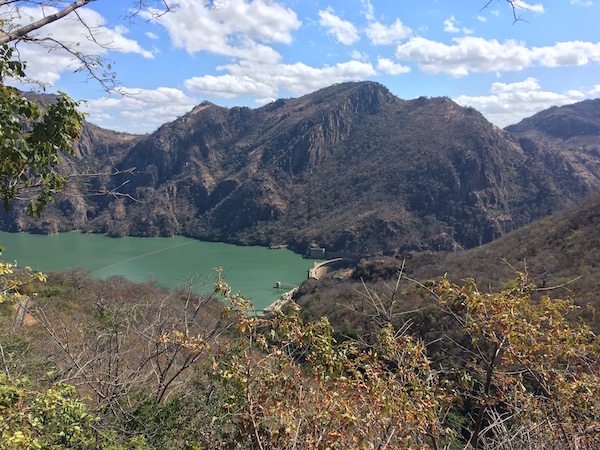 …in Tete Province, where I spent a week capturing stories of health and nutrition programs in villages like these: 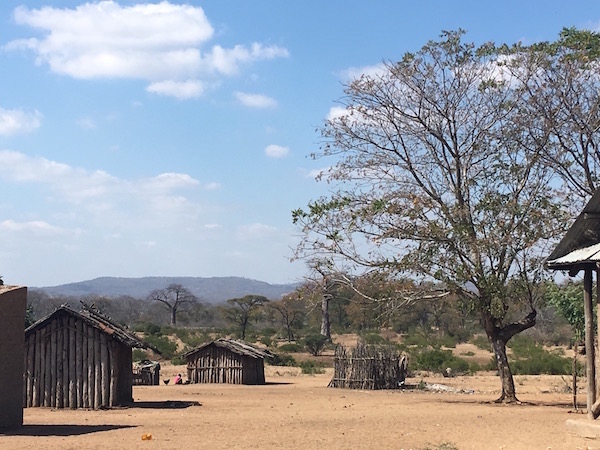 We flew into the city of Tete, which has a suspension bridge reminiscent of the Verrazzano. 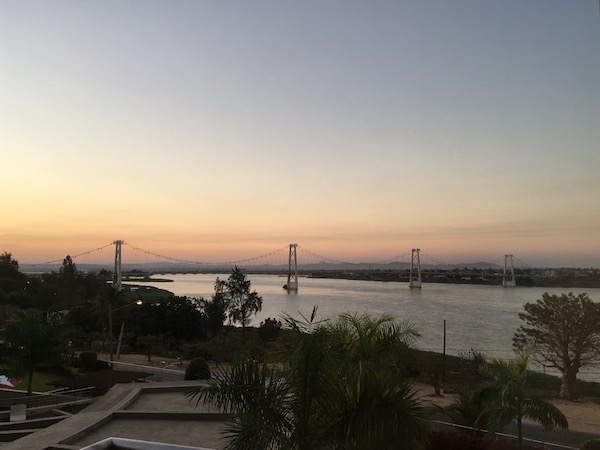 At one point we climbed seven or eight flights of stairs to the top of a government building and got a nice view of the surrounding city and countryside.

We spent a few days in the field,  i.e. in very rural areas close to the Zimbabwe border.

There was one village I visited in which the homes were all beautifully stuccoed and decorated in a way I had never seen before:

Also note the portable solar panel, which is charging a cell phone. It occurred to me that there’s no reason I shouldn’t get one for my own phone, but I’ve been slow to act on the thought. (I am now considering the ones at goalzero.com and I’d welcome other suggestions!)

At the end of the trip we took a little detour back to Tete city in order to visit the largest hydroelectric dam in Southern Africa.

I found it amusing how much fishing and selling of fish was going on despite the large signs that said “no fishing.”

The scenery on the way to and from the dam was lovely, and I enjoyed the quick dip into autumnal topography. (It was technically winter in Mozambique but it felt more like a mild summer most of the time.)

Once back from Tete I spent another week in Maputo, but I already covered that in my previous post… except for the one-day safari I took on my day off. 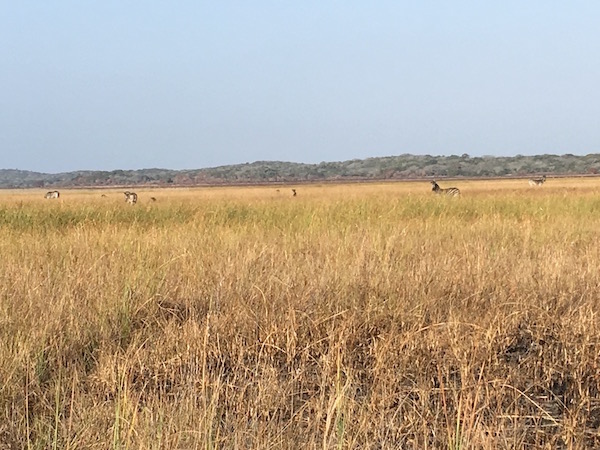 I went to Maputo Special Reserve, which is a nature preserve about an hour and a half south of the city. What set it apart from other safaris, in my opinion, is primarily that there are no big cats there, so you can get out of the car and walk around freely without wondering if you are being stalked by a lion (though you do have to be careful by the lake, as hippos and crocs live there). Secondly, it is not overrun with safari vans, and thus you feel more like Jane Goodall peacefully observing wildlife than like a tourist at some sort of Animal Disney. It’s a shame that it is not a more popular park; I imagine that means there is less money to maintain it. But having been on two pricey safaris during which the vans and people created such a spectacle that it felt more like a (people) zoo than actual nature, I did enjoy having the reserve almost all to myself. 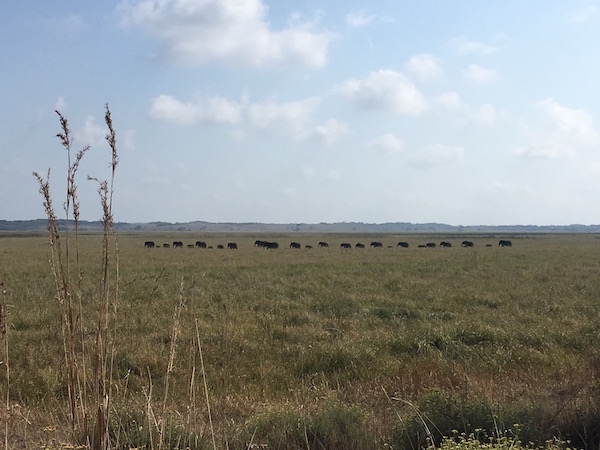 We saw not one but two big herds of elephants. The second time, we cut the engine and just watched them for twenty minutes. It was so quiet that we could hear their trunks sweeping through the grass and their teeth crunching on it. It felt meditative.

In addition to elephants, crocodiles, and hippos, we also saw one or (many) more of these animals: impala, gnu, giraffe, zebra, mongoose, velvet monkey, redbuck, guinea fowl, kudu (my favorite), and many birds. 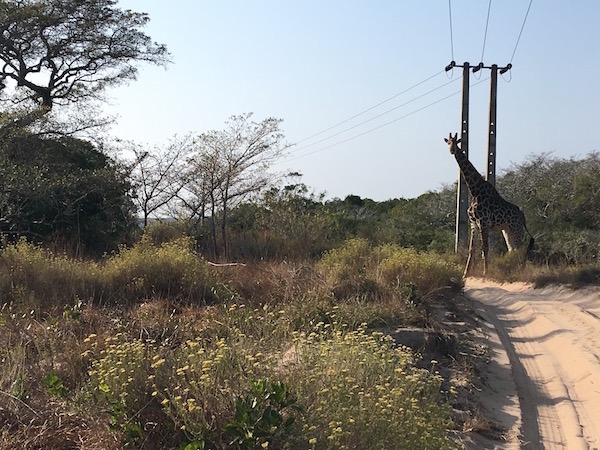 Because we didn’t have to worry about lions or leopards or cheetahs (or monkeys), we were able to set up a picnic table in a random beautiful spot near the lake instead of looking for a dedicated eating area. We had a spread of charcuterie, fruit, and cookies. It felt very low-key glam. 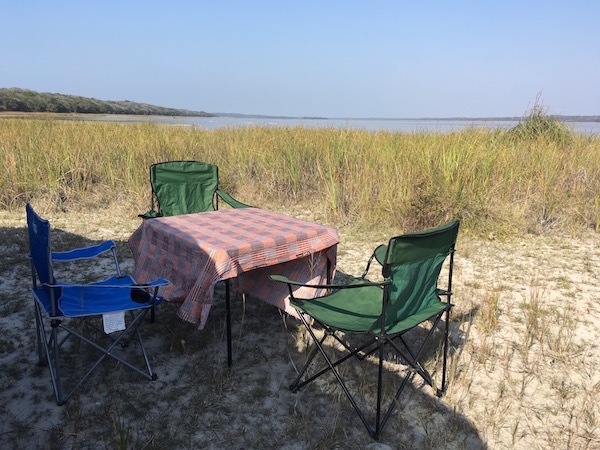 Also, we got incredibly lucky that the hippos came out of the lake and stood on a sand bar during our lunch hour, which apparently they almost never do (or at least not in the presence of people). 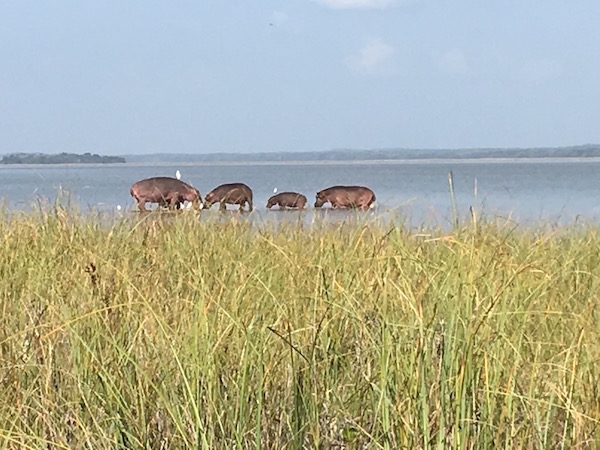 It was a really beautiful, calming experience.

From Mozambique I traveled on to Kenya for part two of the work trip. I took a week’s vacation at the end of it, for a total of three weeks in one of the most amazing places on earth. Pictures coming soon…