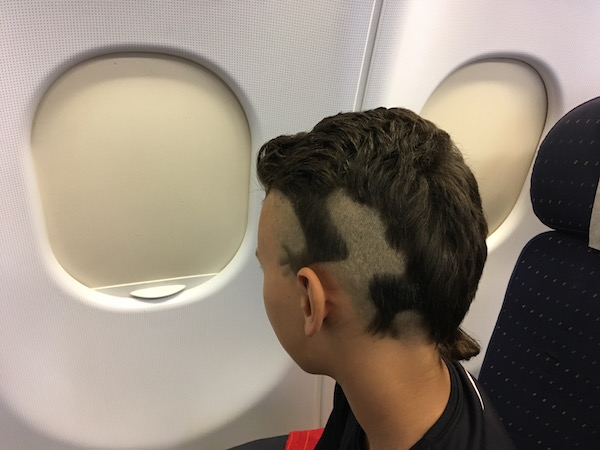 I’ve gotten very lucky with airplane seat assignments lately. On my last two roundtrips, destiny dealt me fascinating individuals whose conversation made otherwise boring flights whiz by and whose perspectives I’m still reflecting on, long after disembarking the planes we shared.

The first person was a man I met on my September flight from JFK to Portland. He was so interesting that very early on, I told him, “I am basically going to interview you for the rest of this flight. I hope that’s alright.” It was.

He grew up in the Bronx projects with his mom, his grandmother, and his older-by-one-year brother. They struggled to get by, and after he graduated from Princeton (he and his brother were the first people in their family to go to college), he got a job in finance and his primary focus became building wealth. His brother, with whom he was extremely close, would encourage him to experience more of life, to travel and to be active, but he would always respond that that could wait until later, after he had built up his nest egg.

Everything changed when his brother was struck and killed by a car while riding his bike, at only 30 years old. My seatmate decided to run the marathon in his honor, since that is something his brother had been training to do that year but now could never complete.

He had never run before. Still, after finishing the New York City marathon – one of the most emotional experiences of his life, he said – he decided to continue honoring his brother by running another marathon, and then another, and then a double marathon (I didn’t even know those exist!), and then an Ironman, and eventually an ultramarathon, which is 100 miles long. Once he had proven to himself that he could do it once, he decided to do it again. And then, he decided to try to break a world record by running an ultramarathon in all fifty states, one per weekend.

He’s got some self-imposed rules: keep working full-time at his high-pressure finance job, leave for each marathon on Friday after work, run the marathon (which takes anywhere from 22-30 hours) from Saturday to Sunday, return from each marathon on Sunday evening in time to get to work right on cue on Monday morning. His job offered him a flexible schedule and time off so he could better pursue this crazy goal of his, but he declined because he wanted to prove that he could do it in addition to his regular life rather than instead of it. He even fits in time for socializing (I believe he does this on Wednesday nights. If I remember correctly, Monday nights are for recovery, Tuesdays are for logistics planning for the next marathon, and Thursdays are for packing.)

I met this guy at a point when he had already technically broken the world record for back to back ultramarathons, but he had yet to apply to Guinness for validation. He is planning to run marathons through the rest of the year, at which point he will have run more than fifty — at least one (sometimes two or three) in every state as well as a bunch in other countries.

I told my seatmate about my fascination with the “sufferfest” and the question of what drives people to do painfully challenging things for their own satisfaction. What is so special about the reward, and what is so different about the person, that compels them to go after things that most people wouldn’t do for all the money in the world? He couldn’t answer my question except to say that he is someone who likes doing things to extremes, and to prove that the impossible is possible.

We parted ways at baggage claim. I wished him luck on his marathon in the Mt. Hood area and got in the car with my sister to commence a week of hanging out with her family. We thought about driving to Mt. Hood on Sunday morning to cheer my new friend on to the finish line, but in the end, it didn’t work with our schedule. I now follow him on social media and I feel fascinated and awed every time he posts a picture from another marathon, but also exhausted and burnt out on his behalf. He is truly a rare breed.

I met another human with staggering depths on the flight back from Iceland (more on that probably three months from now, at the rate I’m going). He asked me about the book I was reading (Thackeray’s Vanity Fair), and after we both agreed that it is one of the most boring and overrated books ever, we started talking about ones we actually like. That led to a wide-ranging conversation about our lives, our parents’ and grandparents’ lives, life in general, and the state of the world.

I learned that he is a biomedical engineer who splits his time between Berlin where his job is, New England where his home is, and Africa and the Middle East, where he travels for work. He fixes medical equipment and trains local health facility staff how to properly use it. The only country in the entire Middle East and Africa that he hasn’t been to yet is Rwanda. His father, meanwhile, was a WWII vet who was effectively prevented from accessing the GI Bill’s education benefits because he was African American. Still, he managed to put himself through Tuskegee Institute and become a nuclear scientist. This was a highly skilled profession that was in great demand in the 1950s, and yet no one in the US would hire him. Instead, he went abroad with his biologist wife and they worked in a variety of countries that embraced their talents and expertise. Thus, my seatmate’s sister was born in Brazil, and he was born in Japan. He lived in Japan for seven years, as well as Russia, Saudi Arabia, and a bunch of other countries that I forgot to take note of. He speaks Japanese, Arabic, Russian, German, and two or three more languages that I’ve also forgotten.

This man had so much knowledge and experience and held so much calm conviction, wisdom, and eloquence, that talking to him felt like being in a history professor emeritus’s office hours. We touched upon discrimination, racism, colonialism, segregation, reparations, student activism, ex-pat life, the ethics of development work, childlessness, mentoring, reading fiction for psychological insights, logical fallacies, and how to make sense of the world. I’ve had countless conversations on these topics before, and without fail one or both of the speakers (myself included) veers into banal, hackneyed, overly general, or cliched territory. But this conversation was special because my seatmate approached everything from — in my perspective at least — the most unexpected and compelling angles. I can’t quite explain it except to say that he has a singular and extremely powerful presence and clarity of vision, and that he managed to speak about common topics in the most uncommon ways. He gave me so much to think about (and a list of books to read!).

It is a rare thing to not feel crappy after spending five hours stuffed in an airplane seat, yet I managed to feel positively enriched by two flights in a row. It amazes and inspires me to know that strangers whom I met fleetingly and will likely never see again nevertheless made a huge impact on me. These ultra-interesting people were a good reminder that everyone – not only the ones with documentary-worthy stories – carries a world within themselves.

I love the idea that you never know what kind of gifts the person sitting next to you might bestow upon you, plucked from their own unique world.

[The photo is from a recent flight during which this boy’s haircut so awed and amazed me that, despite my embarrassment, I asked his mom and him if I could take a picture of it to show my nieces and nephew, in the hopes that one of them will some day decide to go this route (and that their parents will let them).]