As may have been clear when I wrote about it in February, I was in serious awe and admiration of the egúngún masquerade that I saw during the Vodoun festival in Benin. I really didn’t know much about the tradition before visiting; I had mostly just seen photos that blew my mind and convinced me to visit. Since then, I’ve been reading up on it, and the subject grows more and more fascinating with every word. It also grows more and more confusing in certain ways, due to nuances in the cultures, religions, and ceremonial practices of close but not entirely similar peoples who share the egúngún tradition, like the Fon in Benin and the Yoruba in Nigeria.  So, I will quote liberally from authoritative texts rather than try to explain things in my own very unauthoritative words. 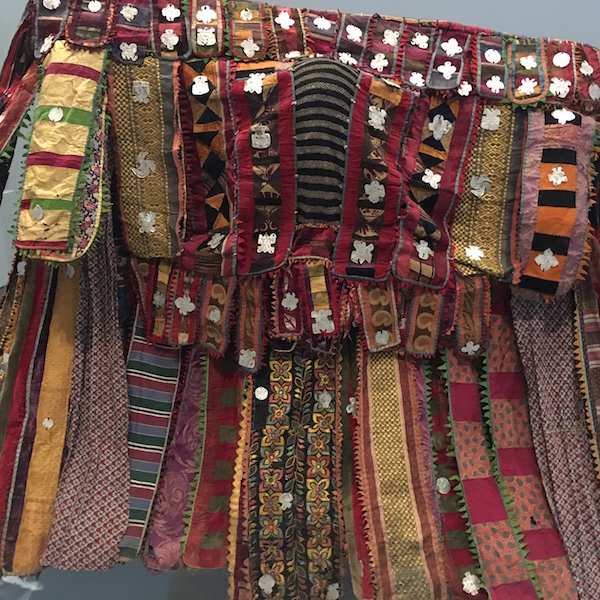 Last weekend I was excited to visit the Brooklyn Museum for their exhibit of an egúngún costume made some time between 1920 and 1948 in Nigeria by a family called Lekewọgbẹ. The museum describes the exhibit as:

“the life story of a twentieth-century Yorùbá masquerade dance costume (egúngún), from its origins in Ògbómọ̀ṣọ́, Nigeria, to its current home in Brooklyn. Composed of over three hundred textiles from Africa, Europe, and Asia, this egúngún swirls into motion during festivals honoring departed ancestors. Centuries old, egúngún is still practiced in Nigeria, the Republic of Benin, and in the Yorùbá diaspora.”

Also according to the Brooklyn Museum, egúngún is a Yoruba word that can refer to three distinct but related things: “all Yoruba masquerades, a specific masking society and related festivities, and the particular masks used in those events.” Egúngún masquerades go back hundreds of years to the sixteenth century.

“Most often appearing at annual festivals that honor immortal ancestors, egúngún also emerge on special occasions or at moments of need. The masks are vessels for communal ancestral spirits and, as such, are active only when occupied by those forces or ny maskers embodying those spirits. Men who perform egúngún remain human while temporarily taking on a spiritual dimension as they physically manifest unseeable ancestral forces. As dancers must conceal their human form to achieve this, they also wear gloves and long socks; a mesh panel at the front permits them to see during performance. …

During festivals, the masked egúngún travels from the shrine or grove to the streets and public centers, accompanied by drummers, singers, ritual specialists, and crowds of followers. These festivals reunite ancestors with the living, who assure the success of their community by lavishing praise and ceremony on the returned relatives. Spreading breezes of blessing in return as it whirls and dances, the egúngún allows the ancestors to participate in the present.”

My interest was piqued when I read that the egúngún tradition is alive and well in the Yoruba diaspora, including Brooklyn. A quick Internet search led me to the realization that the annual Isese Festival featuring an egúngún masquerade is just around the corner on Sunday, June 2. It starts at 11:00am at Locks of Nu Natural Hair Salon, 2000 Fulton Street. The procession will then make its way through the streets of Bed-Stuy. It is firmly on my calendar and I can’t wait to go. If you’re in the NYC area, I encourage you to come, too!

Here’s the invite from their site: 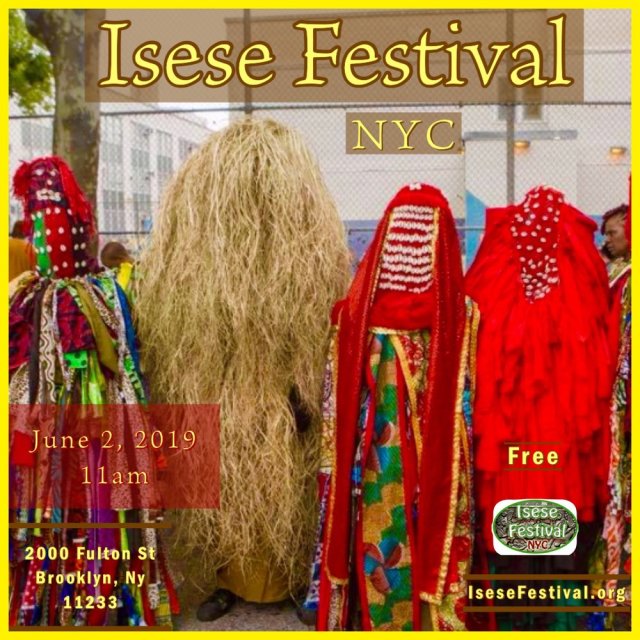 Okay, time to wrap up the Vodoun festival, with my favorite part: the Revenant, also known as the Egungun. Several years ago, it was seeing the gorgeous (uncredited – sorry!) photo of Revenant masqueraders below that made me put the Vodoun festival at the very top of my bucket list, though at the time I didn’t know what they were called or anything about them, and I expected to see them throughout the festival.

In fact, they made only a few appearances, and only one of which I caught. On the evening of the 10th, a much smaller crowd of people than had been at the festival proper gathered in a dirt field in the center of Ouidah to watch the spectacle. From the moment I saw them I was transported with awe – although everything I had witnessed so far had been mind-blowing, these cultural masterpieces were what I had come for.