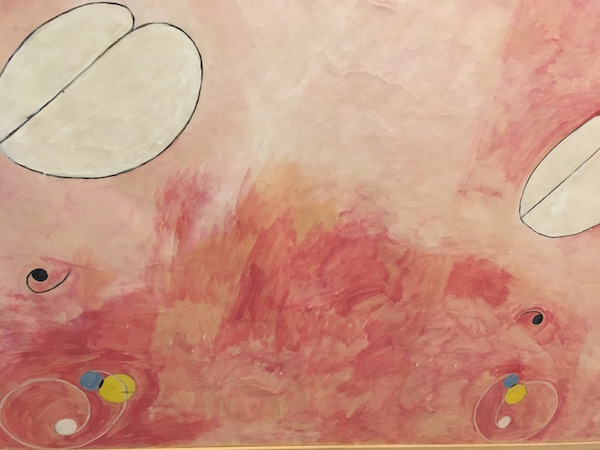 When I arrived at my childhood home on the Wednesday night before Thanksgiving, my mother had France24’s English-language news on. I joked that France24 should be boycotted in her house, since they turned her daughter down for a job. She was perplexed – I guess I hadn’t told her that a little over a year ago, I interviewed – in French! – for an entry-level job on the English language desk of France24’s news bureau. Remarkably, I passed that interview with flying colors. After we talked, the Human Resources manager thought I was such a shoo-in that she took me on an extra tour of the newsroom and introduced me to everyone there. Then she brought me back to her office, sat me in front of a computer, and told me that the next step was to take a timed news quiz, which my would-be boss would assess before inviting me back for a second interview.

I bombed that quiz in a way I haven’t bombed anything since getting a 43% on a chemistry test in tenth grade. In the first part, I had to identify eight political figures with two or three sentences each. I got Bashar al-Assad and Robert Mugabe correct but drew a blank on the one American and five European names. Apparently most were members of various EU government bodies. I can’t even keep track of what the various EU government bodies are called, let alone who their members are.

I don’t think I did as awfully on the rest of the quiz as I did on the first part, but who knows. I had to create a headline and write a script and translate a French article into English, and it all seemed a little too easy, so maybe I didn’t fully understand the assignment. In any case, I did badly enough that the head of the English-language desk did not even want to interview me – for an entry-level position editing footage from the field and archive into simple news packages.

On Wednesday night, I told my mother this story and concluded, “That was my last shot at a decent paying job in France and had I gotten it, I would probably still be living there.” And then my mind boggled. While at the time it felt like a tragedy to lose that job opportunity, not one thing about my life would have been better than it is now, had I stayed in France. Yes, I’d be speaking better French, but at what cost? I’d be working in news – which is clearly not my thing – rather than documentary, I’d be working in an entry-level poorly paid position, and who knows what kind of hovel I’d be living in. I’d have foregone the countless hours of time with dear family and friends that have sustained me since I’ve been back in the United States. And I’d have failed to reroute myself in a direction that makes any sense at all for my future or my mental health. It would have been fun in the short term but a dead end in the long term, prolonging my weird European stasis indefinitely.

The timing of this realization was perfect. It happened almost exactly one year after I heard back from France24 with the news that I wouldn’t be receiving a follow-up interview, and it happened right before a holiday that is all about gratitude.

So I began Thanksgiving counting my blessings. Thank goodness I failed that news quiz. It cleared the way for the rest of my life to begin.

[The photo is from the Hilma af Klint exhibit at the Guggenheim, one of the things I’m so glad I was back in New York to see.]

Happy Thanksgiving, to those who celebrated last week! Thursday and Friday were work days here, so I hosted a belated potluck dinner on Saturday, after spending a small fortune at the Thanksgiving store (actual name), where they have a corner on the market for cranberries and pumpkin pie filling, and at my local rotisserie, where I ordered a 7kg bird that they cooked on a spit. END_OF_DOCUMENT_TOKEN_TO_BE_REPLACED

A belated happy Thanksgiving to all who celebrate! Last week was stressful, between planning against the clock for a 4-country shoot that begins on the 1st of December, and trying to pull off an American Thanksgiving in Dakar at the same time. I am affectionately calling last Thursday’s festivities the toughest producing job of my life. But, in the midst of the madness, I did take the time to count my blessings and to acknowledge all that I’m grateful for. Which is so, so, so much this year.

Including the Thanksgiving meal itself. Until the moment everything was on the table, I wasn’t sure I could pull it off. We didn’t even order a turkey until the day before. The price for a 13 pound bird? Almost $60. Turkeys are rare and thus expensive here. Having never cooked one before, having found no pan big enough to hold it, and having realized too late that I had neither a grill to lift the turkey off the pan (apparently very crucial) nor sufficient time to marinade the bird (also important), the possibility of a very expensive turkey fail weighed on me as I went downtown to pick it up from the Lebanese poultry shop at 9am on Thanksgiving morning.

But here is what happened. As soon as I got back to the house, Madame Lo – who had never seen a turkey before in her life – went to work washing and gutting the thing I was too grossed out to touch, patting it dry with a towel, rubbing it down with a marinade we left on for an hour, and then wiping it away and replacing it with so much smeared-on butter that it gave new meaning to Butterball. She also stuffed some of the herb mixture between chunks of the flesh, Senegalese-style, and when it was time to close up the bird after jamming the (American Food Store-bought) stuffing in, she shoved her brochette skewers into the bird, snapped off the wooden handles and bent the metal into staples like the Incredible Hulk, and hand-stitched any remaining holes together with cooking thread. It looked like Frankenstein but the job was done, and after plopping the turkey onto a found-at-the-very-last-minute tinfoil pan (which we filled with quartered onions and a quarter-inch of apple cider that the Internet told me was a suitable replacement for a grill), it was ready for the oven…

…which is on the second floor. Under the weigh of its contents, the pan buckled and almost broke on the way up the stairs. Then there was the problem of the temperature. I knew the turkey was supposed to cook at 350 degrees Fahrenheit for about 3 hours. I had converted that to Celsius, only to recall that the Lo’s oven isn’t marked with temperatures but with the meaningless numbers 1 through 8. So I had to check on that thing – with the only meat thermometer I could find, an unreliable non-digital version – every five minutes for the last three hours of cooking. When it finally came out of the oven I had absolutely no idea if it was undercooked, overcooked, cooked on top but not bottom, or what.

The Lo’s have two women who come to do the cooking and cleaning on weekdays, and Madame Lo wrangled them to help me prepare the other dishes. I would have been sunk without them, though the three of us made a rather ridiculous group: they were completely unfamiliar with everything I wanted to make and the ways I wanted to make it, and I sort of was, too. I’ve been making some of these dishes for years, but in Dakar I had to come up with creative ingredient substitutions and use completely different cooking tools. It’s somewhat shocking to me that we made it work.

One dish that actually turned out better the Senegalese way was the sweet potatoes, which we cooked on the grill that they usually use for fish.

And a French baguette beats Wonder bread any day (though I know this from past and not current, i.e. gluten-free, experience.)

Speaking of which, the pumpkin and apple toffee gluten-free tarts that I ordered from a German baker who has a counter at the American Food Store were better than anything I could have whipped up. And it meant that we had an American, Senegalese, Lebanese, French, and German Thanksgiving. Exactly as it should be. 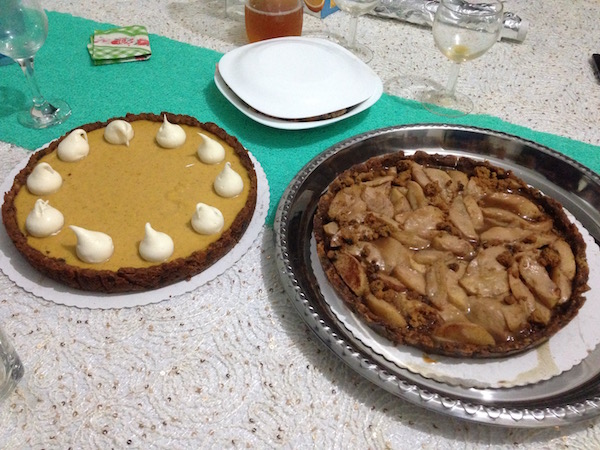 I wasn’t sure how the Lo’s would feel about the meal. I’ve cooked for them a few times before and I’m never sure if they are being polite or truthful when they compliment the food (except for Mamie, who is without fail so effusive that I know she can’t be faking it). But this time they all went as nuts as Mamie usually does. They were in especial rapture over the (miraculous) perfectly cooked turkey, the pumpkin pie, and the green bean casserole, all of which they had never tasted before. Which meant that Mamie had to take it to a whole new level. She took off work early the next day to come home for the leftovers lunch.

Now Madame Lo is talking about making turkey for Christmas instead of their usual mutton. And I’m thinking of surprising them with another pumpkin pie that day. It’s amazing how much joy sharing food between cultures brings.

[P.S. In the first photo, from left to right is Monsieur Lo and Madame Lo (I really call them that, which I find both hilarious and heartwarming), George (a friend of Tantie’s), Tantie aka Armande, and Mamie aka Cecile. Felix is the oldest son and he no longer lives at home, Cecile is in her early 30s, Andre is in his mid-20s (and not pictured because he was working late), and Tantie, at 22, is the baby of the family. This is how I ended up living with them.]