One summer when I was home from college, I trained to be a Philadelphia trolley tour guide. (I was too lazy to study for the exam so I never actually became one.) I don’t remember much of what I learned about my quasi-hometown’s history, but I do remember a piece of advice that a seasoned guide gave us during an instructional tour. He said that if we ever forgot the name of a landmark, we could take an educated guess that it was Franklin [Hospital / Square / Bridge / Museum / Parkway / Institute / Etc.], because, “9 times out of 10 it’s Ben.”

In Senegal, a bastardization of this rule can be perfectly applied to food. If you’re not sure what you’re going to be eating on any given day, well:

Thieboudienne (pronounced cheh-boo-jen) is Senegal’s national dish, and if I never eat it again, that will be alright with me. I didn’t dislike it at first, but after eating it several times a week, for several months, it got to be a bit much – especially considering that the fish is sometimes (not always) stinky, and the rice is often greasy with palm oil, and the vegetables are usually cooked to within an inch of their life.

I much prefer yassa poulet, a lunchtime chicken dish with a sauce of caramelized onions in gravy. It’s almost as ubiquitous as thieboudienne, but much more delicious, so I can deal with eating it many times per week. (Yassa poisson i.e. fish is also a frequent option, but I always choose the chicken over the fish.) 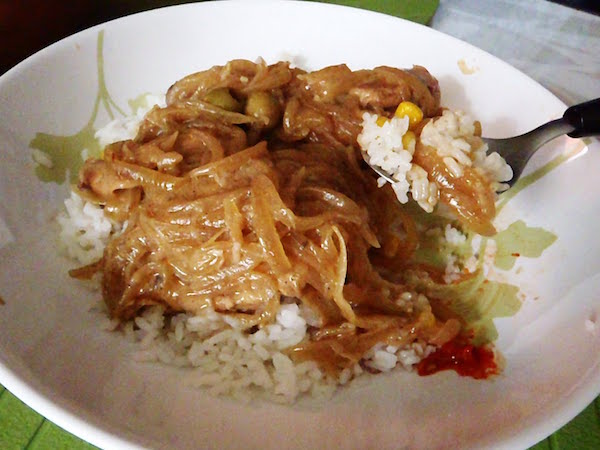 Senegalese food isn’t super varied, and if you stick to local cuisine, you’ll end up eating the same few dishes over and over again. Apart from thieboudienne and yassa poulet, these include:

– mafé, a peanut-tomato-based stew that I love. 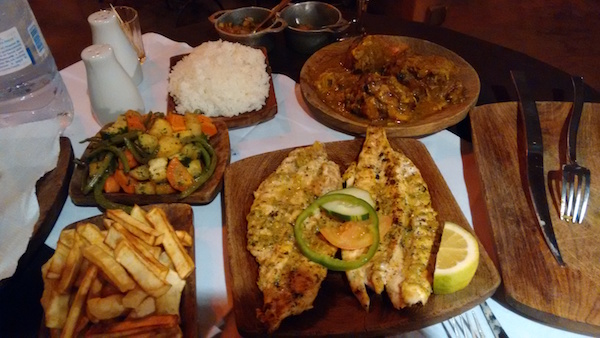 – lotte (monkfish), especially in brochette form (though I don’t mean to confuse you by featuring a very non-skewered version of it in the photo above). 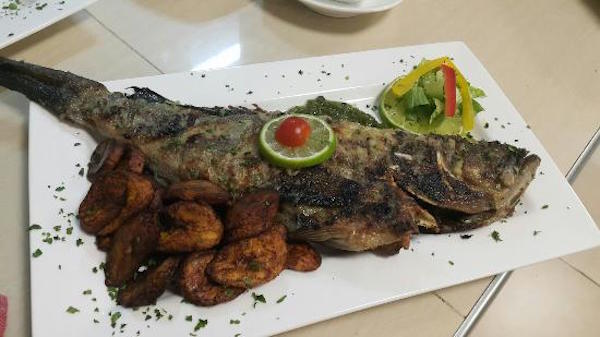 And 90% of the time the meat / fish is served with broken rice, attieké (cassava couscous), or millet couscous. (Which is why, despite the prevalence of baguettes at breakfast, I consider this a very gluten-free-friendly country.)

The family I live with also eats their thieboudienne with stewed bissap aka hibiscus greens. (I’m not a fan.)

As I’ve mentioned before, my stomach has never felt better than during my time in Senegal, probably because there are fewer opportunities for “hidden gluten” to creep into my meals, the only really processed thing I eat here is the gross bullion cube they put into everything including their scrambled eggs (!!!), I eat home-cooked meals way more, and cheese has been nearly stripped from my diet.

Funnily enough, the few times I’ve felt awful have been mostly after the meals I’ve made for my host family, to introduce them to American cooking:

One morning I made them a brunch of scrambled eggs, gluten-free pancakes practically fried in butter and topped with maple syrup, and tomatoes tossed with balls of labneh (which is a Lebanese cheese that comes fairly close to cream cheese). The family thanked me, but my stomach did not. It felt heavy for days afterwards. 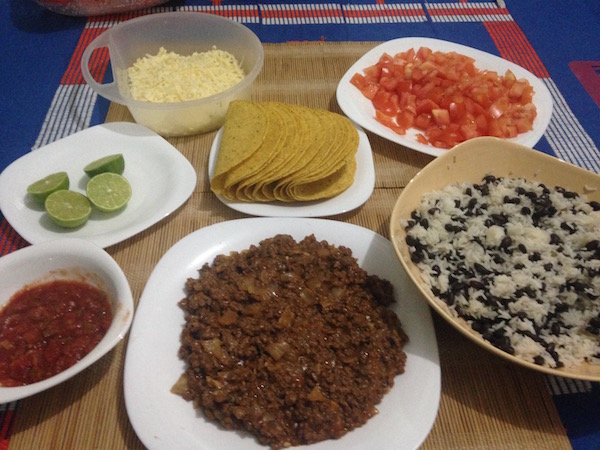 Another night, after finding powdered taco sauce packets and gluten-free taco shells at the American Food Store, Mamie and I teamed up to make faux-Mexican. I believe we also used faux-cheddar as a topping. It tasted surprisingly delicious, but it did not sit well.

Then at Thanksgiving, I served brie and apples before the meal, and the salad included roquefort cheese that I had found at the best grocery store in town. Mamie made unintentional sex noises and gushed that she was thankful God had brought me to Senegal to introduce her to all the delicious cheese in the world. Meanwhile I limped away from the table vowing to spend the rest of my time in Senegal living a happily light-on-dairy existence.

And I have stuck to that promise to myself… though I have also made a plan to move to France based in part on the availability of cheese. I am not joking, sadly.

[P.S. I guess I forgot to take pics of yassa poulet and thiof… So all the photos in this post are mine, except for the yassa pic, which comes from this website, and the thiof pic, which was uncredited on TripAdvisor.]