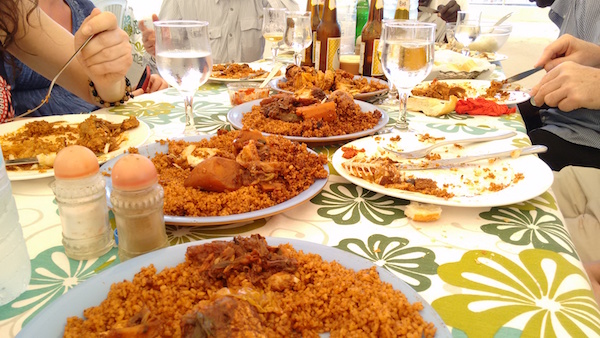 One summer when I was home from college, I trained to be a Philadelphia trolley tour guide. (I was too lazy to study for the exam so I never actually became one.) I don’t remember much of what I learned about my quasi-hometown’s history, but I do remember a piece of advice that a seasoned guide gave us during an instructional tour. He said that if we ever forgot the name of a landmark, we could take an educated guess that it was Franklin [Hospital / Square / Bridge / Museum / Parkway / Institute / Etc.], because, “9 times out of 10 it’s Ben.”

In Senegal, a bastardization of this rule can be perfectly applied to food. If you’re not sure what you’re going to be eating on any given day, well:

This millet porridge is called lakh and it’s the traditional breakfast across Senegal. It’s really heavy and in olden days was perfect for keeping farmers full all morning in the fields. If you’re a working stiff with a desk job, though, it’s a bit of a soporific, so these days in Dakar a baguette with Nutella or Chocopain (the Senegalese equivalent, made with peanuts instead of hazelnuts) is a more typical morning meal.

Traditionally, lakh is eaten with sweetened lait caillé – fermented milk, sort of like a very pungent yogurt. But here the Lo ladies are just eating regular store-bought yogurt and some condensed milk on top.

It is delicious and filling and a gluten-free alternative to the rice cakes I’ve been eating every morning and which got really old really fast (even smeared with exotic bissap/hibiscus or baobab jelly).

I wonder why millet isn’t more popular in the States. I feel like it’s only a matter of time before people start saying that millet is the new quinoa. Although amaranth might get there first…

This has absolutely nothing to do with language learning or wanderlust but I’m just too proud of my culinary masterworks to keep them a secret. Look at these beauties! I made these. 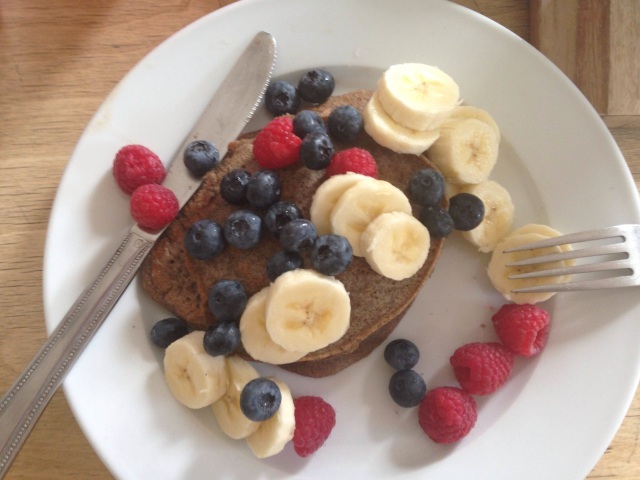 Here is the recipe, if you’d like to try it. (I altered it slightly, using 1/4 cup gluten-free all purpose flour and 3/4 cup buckwheat flour.) These pancakes turned out 100 times tastier than my ill-fated galettes experiment. I would venture so far as to say that even a wheat-eater would find them delicious.

The syrup comes care of my brother-in-law and is so easy to make that I wouldn’t even call it a recipe: in a saucepan, warm equal parts maple syrup and berries until they meld together into a compote.

Bonus: your pancakes will be Talk Foreign to Me approved if you daydream about your next travel adventure while eating them.

I’ve heard a lot of superlatives about Paris – that it’s the most romantic city in the world, the most beautiful, the city of light. But I think its most-fitting top billing is tastiest.

Why? Because I got a contact high every time I passed a bakery. Because the freshly made mayonnaise at a hole-in-the-wall cafe was so far beyond what’s eaten in America that the two deserve different names. Because a 3:00am omelette at a randomly selected bistro was the best I’ve ever had. Because my first bite of entrecôte with bearnaise sauce propelled me to break my 3-day French-only streak with an awestruck, “Are you fucking kidding me?” directed at no one in particular, since I was alone.

And that’s only Paris. In Alsace, they took meat and potatoes to a whole new expletive-inducing level. In fact, except for one unfortunate breakfast, everything I ate in France was better than 90% of what I’ve eaten in America.

Granted, I am one for hyperbole. But even if you take me with a grain of salt (which, incidentally, was also more delicious in France), there’s no denying that the French have a very special way with food.

So without further ado, here’s everything I ate in France:

And that brings us to… DESSERT!!!

The only thing on my wish-list that I didn’t end up eating and really wish I had is raclette. It sounds like God’s gift to cheese and potato lovers, but the specialty restaurant we tried to go to in Paris was all booked up and we ran out of time to find an alternative. I guess this gives me a reason to go back… 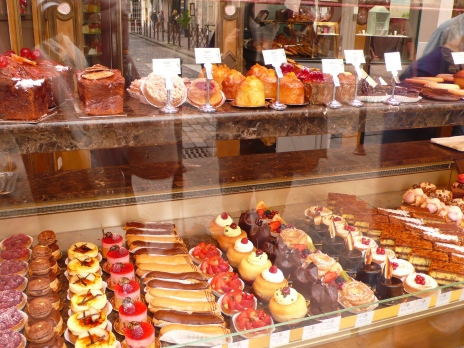 Glacé fleur – the most delicious confection in the world. Here’s a handy guide to the best ice cream in Paris.

Some sort of soufflé

In addition my never-tasted but nevertheless-beloved choucroute garnie, I plan to dine on:

Brie and Camembert and Roquefort

And last but not least, copious quantities du beurre, in any form or fashion.

I will accompany every single meal with a glass of Sancerre.

It’ll be hard work, but I’m up for the challenge.